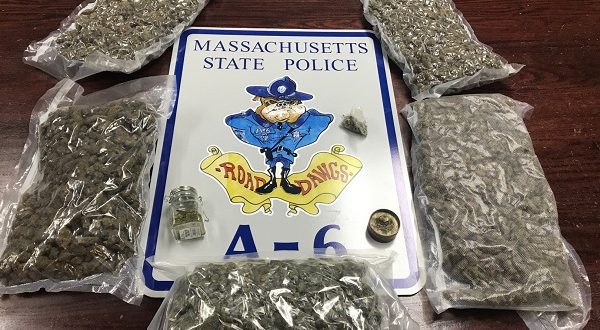 At approximately 4:25 p.m. yesterday, Trooper James Maloney, who is assigned to State Police-Danvers, was patrolling on Route 129 in Lynnfield when he observed a blue Mercedes-Benz E320W accelerate into the Goodwin Circle rotary at a high rate of speed. The speed of the vehicle created an unsafe condition merging into and exiting from the rotary. The trooper observed the operator’s description and made queries that led him to identify the operator as JASON HUNTER, 41, of Waltham. The trooper determined that the operator’s driver’s license was suspended.

Trooper Maloney activated his blue lights and stopped the Mercedes on Route 129 eastbound in Lynnfield. The trooper approached the vehicle, but the operator refused to show a driver’s license. The driver did provide a state ID card and acknowledged that his license was suspended.

The trooper asked HUNTER to exit the vehicle. As he did so, he reached for his right hip, prompting the trooper to handcuff him and placed him under arrest and sat him in the rear of the cruiser. The suspect grew extremely agitated and verbally hostile.

While conducting an inventory of the vehicle, the trooper located in the center console a small amount of a leafy vegetable substance and a grinder with marijuana residue. In the rear of the vehicle, the trooper located five large vacuum sealed bags of green leafy vegetable matter, believed to be marijuana, each weighing approximately one pound. The bags, with a total weight of five pounds, and other material were secured as evidence.

When the trooper returned to the cruiser, he noticed that the suspect had managed to partially open the plastic window dividing the front seats from the rear seats and spit saliva all over the screen of the mounted laptop, the steering wheel, the dashboard, and the windshield. The trooper removed the suspect from the rear of the cruiser and placed him in a seated position on the sidewalk while he cleaned the spit from inside the cruiser. The suspect then began spitting on the exterior of the cruiser. The suspect continued to be verbally hostile while he was transported to the barracks for booking, making statements about the trooper and police officers in general.

HUNTER is charged with the following offenses: