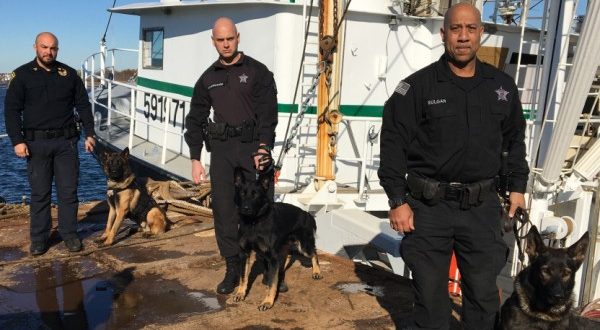 The new Bristol County Sheriff’s Office K9 Officer was at Shallow Creek Kennels in Pennsylvania, looking over puppies a little more than a year old and trying to choose his new partner.

He settled on Xiro (pronounced Zero), a black German Shepherd who had boundless energy. Today, Xiro is 16 months old, weighs 78 pounds, and is a best friend to Officer Isherwood’s family and a loyal partner to his handler.

“I’ve only known him four months but I can’t picture life without him,” Officer Isherwood said of his partner. “Becoming a K9 officer is one of the best things that’s ever happened to me.”

Eros is Officer Bulgar’s second dog as his former partner, Axel, retired earlier this year after almost 10 years of service. Odin is Sgt. Richard’s third K9 partner after the retirement of his first two. Typically, law enforcement dogs retire from duty after nine or 10 years but continue to live with their partners as the family pet.

“This is so important because it speaks to the partnerships we have across law enforcement. We’re all very proud of these partnerships and they make the communities safer,” Sheriff Hodgson said at the graduation ceremony. “These officers and their K9 partners have gone above and beyond the call. Anyone will tell you a K9 Officer is not an eight-hours-a-day job. It’s a commitment to public safety and these K9 officers are outstanding examples of public service.”

The K9 Academy is 16 weeks long and focuses on bonding, communication and building a relationship between handler and K9 partner. The dogs learn and develop basic apprehension and tracking skills that can help law enforcement track suspects or missing persons. Later, the dogs may become trained to detect narcotics, cell phones or explosive components.

“Brennan, Ryan and Sgt. Richard were just absolutely fantastic to work with,” Capt. Douglas said. “These three are some of the most professional, dedicated officers you’ll find in any law enforcement organization. I couldn’t be more proud of them for all they’ve accomplished.”

Friday’s graduation ceremony also brought a special honor for Officer Isherwood. BCSO Lt. Andy Mitzen presented him with a custom sculpture of Xiro that was made from an old weathervane. Officer Isherwood spent several years as a corrections officer inside the House of Corrections and worked with Lt. Mitzen and other security staff for many years before being promoted to the K9 Division.

Also in attendance on Friday were criminal justice students from Attleboro High School. The BCSO K9 team puts on demonstrations for teacher Tobey Reed’s classes annually, and this year saw Officer Isherwood and the team lead a class on defensive tactics that the students enjoyed thoroughly. The kids cheered loudly when Officers Bulgar, Isherwood and Sgt. Richard were recognized, and some of them sought our Officer Isherwood after the ceremony for pictures.

The K9 team also wanted to give some special gratitude to Kathy Costa, owner of Katz Pet Supplies on Route 6 in Somerset who donates all the dog food for the four-legged officers from BCSO, New Bedford PD, Fall River PD and Somerset PD.

Also, the team thanked Charlie Quinn and the entire Quinn family of Standard Marine on Pope’s Island for opening up their property for the team to use for training. Between the marine setting behind Standard Marine to the expansive site of Revere Copper in New Bedford, the K9 training group has been able to train in different environments that mimic real-world situations.

“At Standard Marine, there are welders and fishing boats, a lot of different scents in the air, which makes training in those environments so effective,” Capt. Douglas said. “Revere Copper is so big we’ve done vehicle stops and searches there. These facilities are making a big difference and making our team and our dogs better.”

“They’re out there risking their lives every day, it’s the least I could do,” Charlie Quinn said last week. “They’re all great guys and it’s our pleasure to have them around.”

When Joe isn't writing, he's coaching people to punch each other in the face. He enjoys ancient cultures, dead and living languages, cooking, benching 999#s, and saving the elderly, babies and puppies from burning buildings. While he enjoys long walks on the beach, he will not be your alarm clock, because he's no ding-a-ling.
Previous NOTICE: City of New Bedford trash/recycling pick-up delay for Thanksgiving
Next Massachusetts State Police arrest two, seize nearly 3 Kilos of Cocaine in South Shore Operation