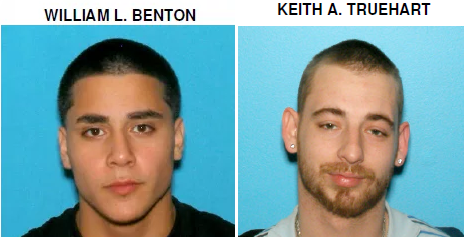 The Massachusetts State Police have added two men to their Most Wanted Fugitives list, one suspected in separate stabbing and shooting incidents on Cape Cod and the other wanted for beating a baby in Belchertown. The State Police Violent Fugitive Apprehension Section is assisting local police in searching for both suspects, whose wanted posters are included with this release.

WILLIAM L. BENTON, 22 (D.O.B. 11/10/92), who fled after skipping a scheduled court date, is wanted on five arrest warrants in Barnstable County. He is suspected of stabbing another man during an argument at a Yarmouth home on April 18 of this year, inflicting life-threatening injuries that the victim survived following emergency surgery. BENTON ran away from the stabbing scene but was later charged by Yarmouth Police with attempted murder and assault and battery with a dangerous weapon.

Additionally, BENTON is suspected of firing a gun at a different man during an argument at Keyes Memorial Beach in Hyannis on May 10, 2014. The man who was shot at was accompanied by his child at the time that BENTON opened fire. No one was injured; Barnstable Police arrested BENTON a short time later on firearms and assault charges.

BENTON is wanted on three additional warrants, two of them for assaults. He is known to have access to firearms, knives and other weapons and is considered armed and dangerous. He is white, 5’7″ tall and approximately 145 lbs., with black hair, brown eyes, a scar on his left cheek, and several tattoos: the Grim Reaper on his back and images of a flower, frog and flag on his left forearm.

BENTON, who was living in Mashpee at the time of his crimes, has ties throughout the Cape, including that town as well as Yarmouth, Hyannis, and Falmouth.

KEITH A. TRUEHART, 30 (D.O.B. 5/18/85), is being sought on two arrest warrants, one of them for assault and battery on a child causing substantial injury. On Nov. 15, 2014, Belchertown Police responded to a call for a 9-month-old baby supposedly injured in a fall. Upon arrival officers observed significant bruising on the child’s forehead and around both eyes — injuries that were inconsistent with a fall. The child was taken to a nearby trauma center, where medical personnel discovered the child also had suffered two previous rib fractures. Medical evidence indicated that the child’s new injuries were not accidental but had been inflicted by someone. Belchertown Police subsequently determined that TRUEHART had been alone with the child at the time that the injuries occurred, and that he later fled prior to response of police and paramedics.

TRUEHART is also wanted by Amherst Police on charges of assault and battery and malicious destruction of property.

TRUEHART, who was living in Belchertown at the time of the assault on the baby, has ties to that town, as well as to Amherst and Holyoke. He is white, 5’11”, 185 lbs., with brown hair, green eyes, and scars near his left eye and on his upper right arm. He has several tattoos: the word “Tina” on his right forearm; the word “Blazed” on his left forearm; an image of a dragon and sword on his shoulder; barbed wire on his right shoulder; and the letters “DLS” on his abdomen.

Anyone with information on the whereabouts of WILLIAM L. BENTON or KEITH A. TRUEHART is urged to call the Massachusetts State Police Violence Fugitive Apprehension Section at 1-800-KAPTURE (1-800-527-8873).