Home / Latest / Pressley: Congress Needs To “Step Up” On Abortion 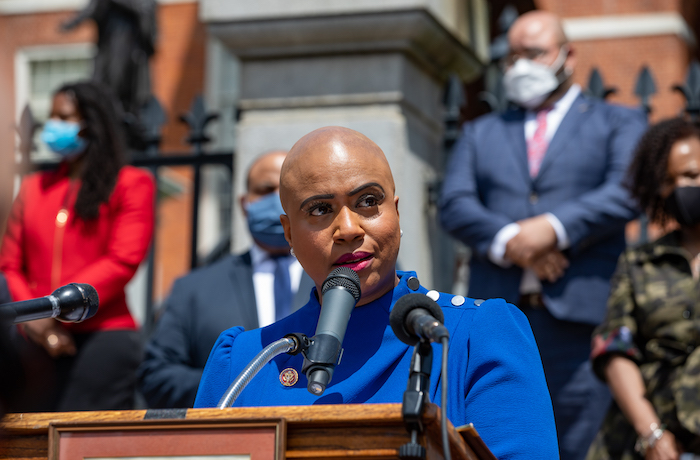 Pressley: Congress Needs To “Step Up” On Abortion

In the wake of an overnight Supreme Court order allowing a Texas law restricting abortions to take effect, Congresswoman Ayanna Pressley issued a call to expand the high court and laid out steps she wants Congress to take to “proactively legislate reproductive justice.”

The Supreme Court, in a 5-4 decision, declined a request to block the law banning abortions after about six weeks, a point when many people do not know they are pregnant. The law is to be enforced through a provision allowing private citizens to sue anyone who helps a woman get an abortion.

The court’s majority said its order was “not based on any conclusion about the constitutionality of Texas’s law” and did not limit “other procedurally proper challenges.” Chief Justice John Roberts and judges Stephen Breyer, Elena Kagan and Sonia Sotomayor each wrote dissenting opinions, with Sotomayor saying that with the order, “a majority of Justices have opted to bury their heads in the sand.”

Pressley said the court’s move “makes plain that the Court is not on the side of the people and Congress must step up.” She called for passage of a bill she filed with Connecticut Sen. Richard Blumenthal and California Rep. Judy Chu, which she said “would codify a person’s right to choose and ban harmful state laws like the one in Texas.”

“We must also repeal the racist and discriminatory Hyde Amendment, which has disproportionately impacted low-income, Black, brown, and Indigenous communities, and expand the Supreme Court to restore balance to the court and protect our democracy,” the Dorchester Democrat said. The group Students for Life Action cheered the court’s decision Thursday morning, describing it as “baby steps in the right direction toward the obvious conclusion that Roe is fatally flawed and must go,” in reference to the 1973 Roe v. Wade decision that legalized abortion.