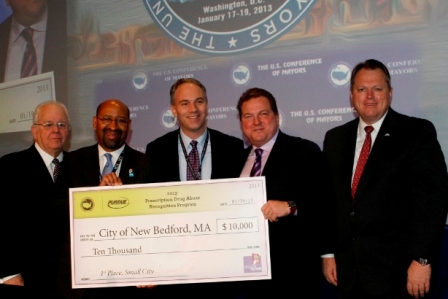 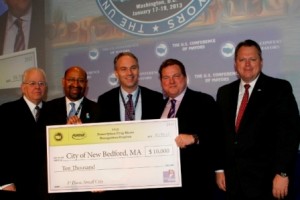 During the recent 81st Winter Meeting of The United States Conference of Mayors (USCM) in Washington, D.C., New Bedford Mayor Jon Mitchell accepted a grant award for the City of New Bedford’s prescription drug abuse prevention initiative. Grant awards were given to outstanding local initiatives with the greatest potential to reduce the misuse and abuse of prescription drugs, particularly among young people. New Bedford was one of four winners selected from a national pool of applicants and the City took first place in the “Small City” category.

The Pathways Coalition, under the leadership of Mayor Jon Mitchell, will utilize a team of young people aged 14‐24 as peer educators, to provide education and training to the community about prescription drug safety, in line with the guidelines set out by the Office of National Drug Control Policy (ONDCP). The program will provide a minimum of 12 presentations/appearances throughout the community, as well as a social marketing campaign that will utilize various electronic media outlets and web presence to promote the prescription safety program and reach all families in New Bedford with the message.

“Educating youth about the dangers of prescription drug misuse and abuse is critical to our efforts to combat substance abuse and the illicit drug trade in our community. In New Bedford, public health officials, drug treatment providers, and law enforcement remain committed to working together to address this public health challenge. One key feature of this program is that it engages and educates young people to teach their peers and empowers youth to become leaders who can help solve their own problems. I’m pleased that the United States Conference of Mayors and Purdue Pharma have recognized this program and I look forward to it serving as a model for other cities across the country.” – New Bedford, MA Mayor Jon Mitchell

The 2013 Safeguard My Meds Prescription Drug Abuse Recognition Program is the latest initiative in a four-year partnership between USCM and Purdue Pharma, L.P., with the goal supporting and/or enhancing existing prescription drug abuse prevention programs in America’s cities, as well as encouraging the development of new and innovative programs. The successful USCM/Purdue Pharma partnership began in 2009 with a nationwide public awareness campaign, featuring Mayoral PSAs on the dangers of prescription drug abuse, and offering simple steps parents can take to protect their children by properly storing and disposing of medication in the home. To date, Mayors have recorded more than 200 radio and television PSAs, which have reached an audience of millions in cities across the country.