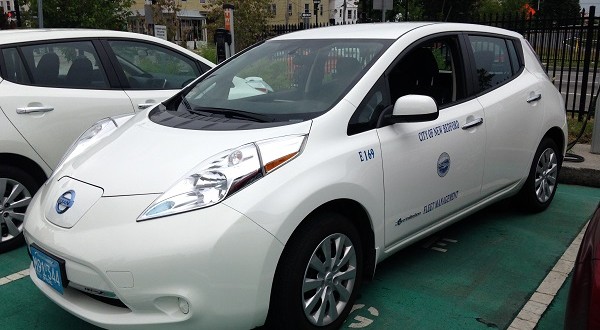 Mayor Jon Mitchell, state officials and other leaders today announced that the City has converted more than 25% of its general use fleet to electric vehicles, as part of an initiative to replace more of New Bedford’s aging fleet with fuel efficient, cost effective, and environmentally friendly electric cars. The milestone makes New Bedford’s electric vehicle fleet the largest of its kind of any municipality in the Commonwealth of Massachusetts and reinforces the Mitchell Administration’s commitment to integrating clean energy technology into city government operations.

“I want to thank the Baker- Polito Administration, MassDEP and Commissioner Suuberg in particular their recognition and support of our efforts in New Bedford to modernize our City’s aging fleet in a manner that saves taxpayer dollars and is better for the environment. New Bedford has a lot at stake when it comes to sea-level rise and climate change and so it is important for us to lead by example. Whether it’s our nation-leading solar program, converting our municipal fleet to electric vehicles, or aggressively pursuing offshore wind energy opportunities, we’ve tried to demonstrate that much can be accomplished when there is a strong local consensus and sustained commitment to big renewable energy goals,” said Mayor Mitchell

Financial incentives from Massachusetts Department of Environmental Protection’s EVIP program have supported the City of New Bedford’s implementation of its aggressive green energy agenda. Through the Massachusetts Electric Vehicle Incentive Program, MassDEP, has granted the City of New Bedford $206,000 in funding to support the City’s efforts to incorporate clean energy technology into its transportation infrastructure.

“Over the last three years, our MassEVIP program has awarded nearly $1.8 million to help purchase 123 electric vehicles and install EV charging stations,” said MassDEP Commissioner Suuberg. “There are now more than 7,000 EVs on Massachusetts roads, and we’re pleased that New Bedford is helping to lead the way with this exciting new technology.”

“Our success in pursuing an ambitious renewable energy agenda is tied to the strong partnerships New Bedford has forged both with state government and with private sector partners like Nissan,” said Mayor Mitchell. 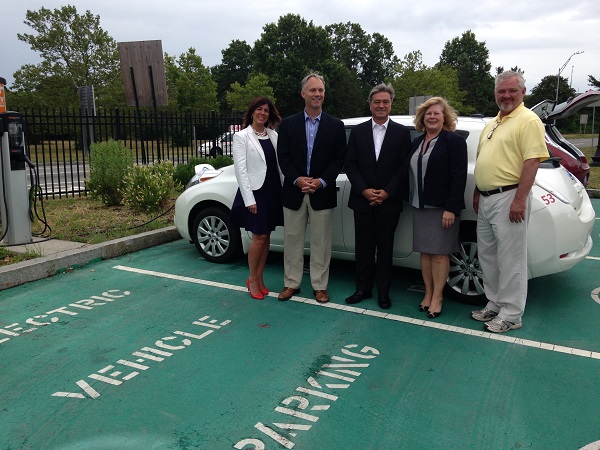 “Nissan highly values partnerships with local and state governments as well as other organizations that share our vision for more sustainable mobility,” said Brian Maragno, Director, Nissan Electric Vehicle Sales and Marketing. “We are happy to work with the City of New Bedford to incorporate more electric vehicles into its fleet and ultimately to help local government meet its environmental goals.”

Last June, the City first introduced ten electric vehicles to its fleet when older model vehicles that were purchased in the early/mid 1990s were retired. As of today’s announcement, more than 25 % of the cars in the City’s municipal passenger fleet of 70 vehicles have been converted to electric vehicles. New Bedford is currently leasing 19 new Nissan LEAF models. The Nissan LEAF vehicles are used by the New Bedford Health Department and New Bedford Public Schools.

The electric vehicles are super efficient – travelling the equivalent of 126 miles per gallon on city streets. As a result of the vehicle conversion initiative, the City’s fleet now produces fewer harmful carbon emissions and at an average of $60 per vehicle, per month, it has been less expensive than purchasing or leasing conventional cars.

In addition, city officials announced that New Bedford has expanded the number of electric car charging stations from 8 in 2011 to 27 total stations now throughout the City. 10 of the 27 are available to the public free of charge in City parking garages and in the International Marketplace public lot.

Nissan recently donated two “Fast Charger” stations to the City which are located at the International Marketplace and on City Pier 3. The public may use these Fast Chargers for a fee payable by credit card at the station. New Nissan LEAF buyers may be eligible for complimentary charging through Nissan’s “No Charge to Charge” promotion, which offers two years of free public charging with the purchase or lease of a new LEAF in select markets.

The Fast Charger stations deliver a quick charge, enabling drivers to charge their electric vehicles up to 80-percent capacity in about 30 minutes.