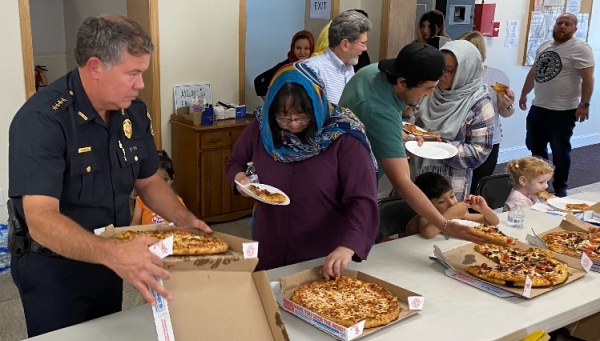 “On Saturday, June 4th, Chief Paul Oliveira, Deputy Chief Adelino Sousa, Lt. Scott Carola and Ofc. Mohammad Mir spoke with a group of newly arrived Afghan refugees who now reside in New Bedford. A presentation was given regarding the laws of our commonwealth, the way that American police operate, as well as some safety tips.

Afterwards, pizza was delivered that had been donated by Nelson Hockert-Lotz and Anthony Squizzero of Domino’s pizza. which gave us all a chance to break bread and get to know one another. Toys donated by “Safe Zones-Fill the Bus” were later handed out to some excellent children. A great time was had by all, and we look forward to remaining in touch!

We are grateful to Martin Bentz and the Islamic Society of Southeastern Massachusetts for the honor of being invited to their beautiful mosque. We could not have felt more welcomed.

New Bedford police officer Mohammad Mir has been assigned as a liaison to our budding Muslim community, a position for which he is perfectly suited.” -New Bedford Police Department.

All photos by the New Bedford Police Department: