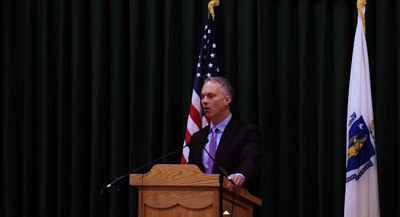 6. Cultural milestones include: historic return of the Charles W. Morgan brings nearly 40,000 visitors, Feast of the Blessed Sacrament celebrated 100 years, largest and best Veterans’ Day Parade in decades, adoption of Community Preservation Act
Mayor announces the City will be releasing in weeks ahead guiding principles to ensure future development projects include opportunities for New Bedford workers and companies
“I am proud to announce a set of principles for public and private investments in the City called “New Bedford Works.” These principles will be rolled out in the weeks ahead, but the basic idea is a set of mutual commitments by the City and anyone wishing to invest here concerning the hiring of City residents and contracting with City businesses.”

“At time when major investments like the casino, the harbor clean up, and other projects are or could be coming on line, we need to establish an understanding of what obligations are owed to this community.”

“The deal we fought for and struck with KG Urban is a good one for New Bedford. It is on New Bedford’s terms.”

“I shared the concerns voiced by many that a casino might diminish the appeal of the downtown, the availability of waterfront land, and the City’s image. So I fought for terms that directly address these issues.”

“The agreement limits the number of shops, restaurants and hotel rooms so casino patrons will spill over into the downtown. We put in a conference center could hold two thousand people, not all of whom will want to gamble, but would rather spend time at our cultural attractions. We’ve protected the Zeiterion, created a voucher program to encourage tourist spending in New Bedford, and required the operator to procure a minimum of $10,000,000 goods and services from New Bedford businesses. We made sure the harbor bulkhead is put to good use, creating as much new space of commercial fishing berthing as possible and using the remaining area for a marina.”

“This project represents a unique opportunity for New Bedford. We should not regard the project as the goose that laid the golden egg. The annual payments should not be viewed as an opportunity to loosen up the purse strings and spend freely. This money needs to be reinvested wisely…The priorities are all spelled out explicitly in the Host Community Agreement: funds should be reinvested in economic development, port development, community preservation, and be used to improve city services and stabilize the city’s finances.”

“The casino should be seen not as an end in itself, but as another means to create opportunity for our residents. “

“We need UMass to be a partner in the city’s resurgence and grow its physical presence in the city, for the city’s sake or for its own sake.”

“There have been encouraging signs of late. Chancellor Divina Grossman has worked with the city to kick start the long-stalled SMAST expansion in the South End, and now that project has traction. UMass-Dartmouth is now actively looking for opportunities in the downtown as well. And the university is supporting some of the new technology incubators that are setting up in the city. This is just a start; there’s a long way to go, but the effort is now moving in the right direction.”