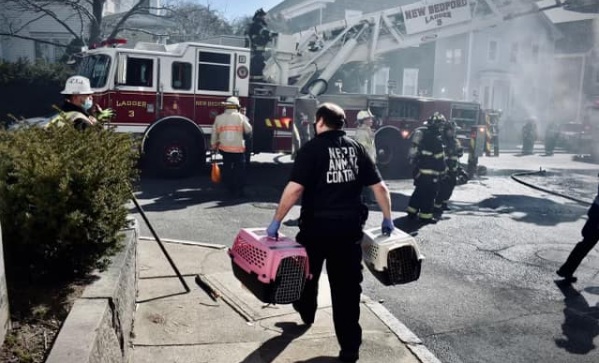 “Today at 9:39 multiple 911 calls were received reporting a structure fire at 303 County Street. Upon arrival, crews observed a heavy fire condition on the first floor of this wood frame two-family dwelling.

Three occupants of the residence were trapped on the second and third floors of the dwelling. Crews from Engine Co. 6 and Ladder Co. 3 positioned two ground ladders in the rear of the building to rescue the occupants. The male occupant who was trapped in a third-floor bedroom jumped onto the ladder as soon as it was placed below the window. FF Paul Medeiros from Ladder 3 can be seen holding on to the victim to prevent him from falling. He was able to hold onto the victim until another firefighter was able to assist the victim down the ladder.

The fire was under control in less than hour. Command called for a special alarm which included ISU-1 (air supply) and Engine 8. The first alarm apparatus included Engines 1, 6, 7, Ladders 1 and 3, along with Command Units 1 and 2. The cause of the fire is being investigated by the NBFD Fire Investigation Unit and the State Fire Marshals Office. Investigators are determining if the residence was protected by working smoke detectors.

During interior operations, firefighters located and removed sixty cats from the residence. Twenty-six of them were treated and resuscitated by NBEMS Paramedics, Animal Control Officers, NBPD Officers, and available NBFD personnel. The members of these agencies worked seamlessly to provide these animals care in what rapidly evolved into a domesticated animal mass casualty incident.

Animal Control Officers transported cats to veterinary emergency clinics in West Bridgewater, Swansea, and as far away as West Greenwich, Rhode Island. All of them will require hyperbaric treatment and oxygen overnight. Thirty-four cats died in the fire. NBEMS and NBFD were equipped with Coalition for Animals rescue masks however the supply was exhausted today.

Manny Maciel, Head of Animal Control stated this was largest amount of pets treated and transported from a structure fire and extends his thanks to all personnel on scene who assisted with care of these animals.

The Providence Canteen provided support and rehab services to a large contingent of first responders and we appreciate and thank you for your efforts.

The Department is proud of District Chief Michael Dandurand along with the members of Engine Co. 6 and Ladder Co. 3 for their skill and quick actions in rescuing the three victims.”

All photos by Manny Fernandes and NBEMS.

When Joe isn't writing, he's coaching people to punch each other in the face. He enjoys ancient cultures, dead and living languages, cooking, benching 999#s, and saving the elderly, babies and puppies from burning buildings. While he enjoys long walks on the beach, he will not be your alarm clock, because he's no ding-a-ling.
Previous New Bedford Police reports a decade-long drop in crime; a trend that persisted in 2020
Next Acushnet Fire Chief Gallagher pleased with town’s “dramatic improvement” with COVID cases