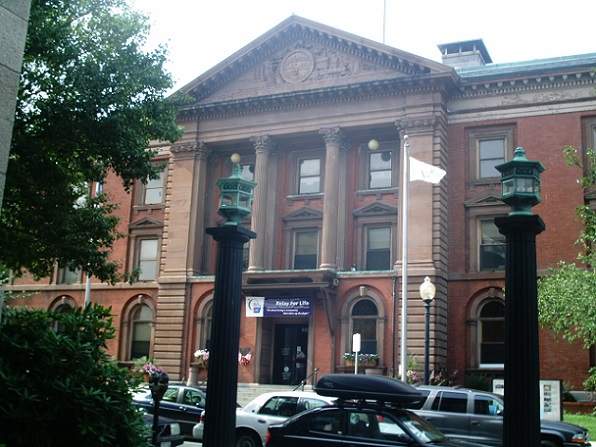 New Bedford Sees Energy Initiative As a Key to Its Future

“New Bedford’s renewable power program is strengthening our City’s economy, our education system, and our environment, while saving taxpayers considerable money in the years ahead,” said Mayor Mitchell. “Every city in America should be doing what we are doing here in New Bedford, and I could not be prouder of the creativity, commitment, and teamwork of all those here who helped us reach our goals.”

The Mayor’s remarks came against the backdrop of the New Bedford High School campus on Hathaway Blvd., where a contaminated brownfield site had been recently cleaned up by the City to make way for the installation of a two-acre solar farm that will generate nearly half a megawatt of electric power.

Progress Toward Energy Goals
The High School solar project is one of several sizable solar power contracts the Mitchell Administration has inked since taking office last year, including a 3.5 megawatt project on City-owned land in Rochester which broke ground this spring. In all 4.3 megawatts of projects are now installed or under construction and another 7.1 megawatts will be officially announced in coming weeks this fall.

When all projects are completed New Bedford will have exceeded the City’s 2011 goal of purchasing ten megawatts of power from renewable sources. No other Massachusetts municipality has achieved comparable progress toward the ten megawatt benchmark. (Ten megawatts represents enough energy to power approximately 1,500 homes.) The Mitchell Administration has also adopted a long-term goal of purchasing 60% of its energy needs from solar sources. With today’s news, the City has reached 43%.

“The Patrick Administration is committed to the economic revitalization of New Bedford and we are proud that the City serves as a role model for American communities seeking a more sustainable future,” said Massachusetts Department of Energy Resources Commissioner Mark Sylvia.

Sylvia added, “Thanks to collaborative efforts like these, the Commonwealth is reinforcing our national leadership in renewable energy and building a clean energy economy in the process. With 311 megawatts of solar installed, we have surpassed Governor Patrick’s 2017 goal and set a new one – 1,600 megawatts by 2020.”

Taxpayer Savings
The City of New Bedford is a major purchaser of electricity from the grid, with nearly one hundred city buildings including wastewater and water treatment plants, so the projected energy savings from the projects are substantial, generating $500,000 in budget savings next year and nearly $20 million over the next twenty years.

Environmental Benefits
“We are turning our environmental liabilities into environmental assets,” said the Mayor. “These solar projects are not just about cutting local government’s utility bills and saving taxpayer dollars, but part of an environmental strategy to both clean up contaminated properties and reduce fossil fuel consumption.”

The site of the High School solar field was remediated earlier this summer by crews from the City’s Department of Public Infrastructure through the use of an engineered barrier or “cap” of crushed stone and a security fence and landscaping around the perimeter.

The cleanup solution meets all U.S. EPA and Massachusetts Department of Environmental Protection (MassDEP) standards and ensures the health and safety of students, teachers, and staff. Using value engineering, and city crews rather than private contractors, the cleanup proceeded smoothly and cost just half of the original $1 million Mayor Mitchell requested from the City Council. Another 1.5 megawatt solar project, similarly located on a brownfield, is expected to be finalized by the end of the year.

“The EPA is a partner to the City of New Bedford across many projects, but this occasion stands out as a remarkable achievement for the City. We applaud the innovation and forward-thinking that has gone into the City’s Energy Initiative under Mayor Mitchell,” said Regional EPA Administrator Curt Spaulding.

“In 2011, MassDEP and DOER established the Clean Energy Results Program to promote clean energy generation on formerly contaminated land. To date, we have approved the installation of more than 90 megawatts of energy,” said MassDEP Commissioner Kenneth Kimmell. “Today it’s heartening to see the City of New Bedford embrace our ambitious goal as a key piece of its impressive clean energy program.”

Education Connection
In the case of the High School solar project, the City’s education goals are also being served. The project will improve science education through the installation of an interactive digital “kiosk” and other tools so teachers at the High School and other schools can incorporate the solar project into their science lessons. The Mayor was joined by students from the STEM (Science, Technology, Engineering, Math) Academy at the High School who were starting their first day of the school year.

“Our public schools are essential to the City’s long-term economic competitiveness,” said Dr. Pia Durkin, the new Superintendent of New Bedford Public Schools. “That is why science education is such a high priority. But to succeed we need to make our science curriculum relevant and inspiring. The world must be our science lab, and that is exactly the approach we intend with the solar project here at New Bedford High.”

Beaumont Solar Company of New Bedford, led by President and CEO Phil Cavallo, has designed and installed for Con Edison Solutions several of the solar projects that are already operational. Beaumont will also be installing the project at the High School.

“New Bedford can take special pride in these renewable projects because so much of the labor that went into them was performed by local residents,” said Philip Cavallo, CEO of Beaumont Solar. “We at Beaumont are excited to be part of a team that is boosting local employment as we preserve our environmental resources.”

“We are proud to have been selected by the City to help them make energy history. When it comes to embracing renewable energy, New Bedford stands as a model to other municipalities,” said Michael Gibson, Vice President of Energy Services at ConEdison Solutions.

“Mayor Mitchell and his team deserve praise for setting ambitious goals for their sustainability initiatives,” said John DeVillars, BlueWave Capital’s Managing Partner. “Their outstanding progress demonstrates their ability to orchestrate the efforts of a first-rate team of partners in the world of solar engineering and finance.”