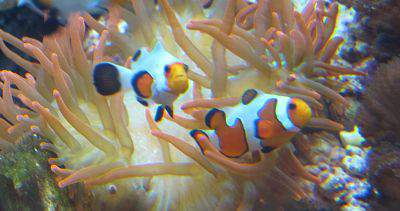 What’s new at the Ocean Explorium?!

Everybody loves Nemo! These bright orange fish, playing peek-a-boo in the anemones, are lots of fun.

Now there are even more clownfish to love at the Ocean Explorium. Two new variants of the Amphiprion ocellaris clownfish – cousins of Nemo – have been added to the exhibits: The Davinci clownfish and the Wyoming Whites. Both “designer clowns” are distinguished by their recessive traits that are brought out through selective breeding. The Davinci clownfish are identified by their irregular white patches outlined in black. Our very own Exhibit Curator, Warren Gibbons, won the pair of Davinci clownfish in a raffle at the recent Ocean State Reef Aquarium Society (OSRAS) Annual Conference, where the Ocean Explorium was an exhibitor selling aquacultured corals. The Wyoming White clownfish are mostly white with orange snouts and pectoral spots, outlined in black. The Wyoming Whites were donated by Ben Lancaster, who won the fish at the OSRAS conference.

A new octopus arrived by FedEx recently and was installed in the Living Laboratory, near the Coral Farm exhibit. A bit shy, this mature octopus was collected from the waters off Florida. Another new arrival is the Engineer Goby, an industrious sand digger, sifter and cleaner. All that digging can make a Goby hungry, and its reward is a meal of the tiny invertebrates it has unearthed. A number of dainty, colorful Wrasses have been added to the Coral Reef habitat while several exotic crabs and snails have found a new home in different aquariums within the Ocean Explorium.

The Ocean Explorium is located at 174 Union Street in downtown New Bedford and is handicap accessible via the rear entrance. The Science on a Sphere® exhibit is generously provided through a partnership with the University of Massachusetts Dartmouth.