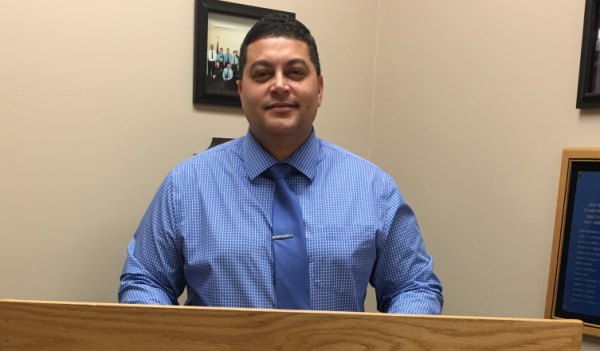 The New Bedford Police Department (NBPD) congratulates former Public Information Officer (PIO) Lt. Nathaniel Rodriquez on becoming the first Latino officer in the history of the department to achieve the rank of Captain.

Capt. Rodriguez took command of Station 2 on the south end of New Bedford on Sept. 28.

Rodriguez started his career with the NBPD in 2004 after first serving as a Bristol County Corrections Officer. Since joining the force, he has elevated through the ranks as a Sergeant and Lieutenant prior to obtaining the highest mark for the department in the State’s Civil Service Captain’s exam earlier this year. During his years at the NBPD, he has worked in Patrol, Training, and Professional Standards before becoming PIO in 2018.

“I see this as a moment for all young women and men of not just Latino heritage, but all heritages to realize that we matter to this city and to this country. Now is our time to lead with pride in who we are and where we come from,” said Rodriguez.

“With Latinos representing more than 20% of New Bedford’s population, we are focused on ensuring our department looks like our City and reflects the perspectives of all cultures and backgrounds. Imagine the positive difference that can happen when a child sees their own face in that of a police officer,” said Chief Joseph Cordeiro.

Latinos made up about 12.5 percent of police forces in 2016, up from 7.8 percent in 1997, a 60 percent increase, according to Bureau of Justice Statistics data. “We hope that number continues to grow,” said Rodriquez, “as I encourage young people of all backgrounds to consider the positive difference they can make in choosing this profession. An organization is always better off when it is diverse and can appreciate and respect that diversity.”