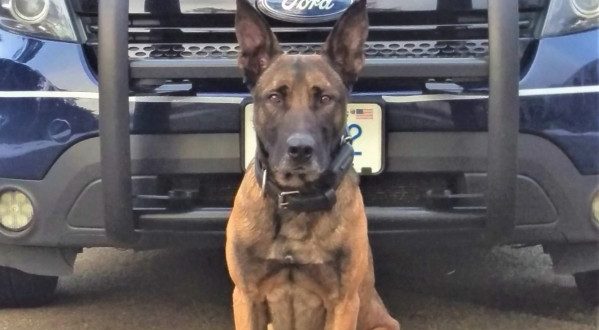 Shortly before 11 p.m. Wednesday, Massachusetts State Police patrols and an MSP K9 unit responded to Industrial Park Road at Bay Street in Taunton to assist Norton Police in the apprehension of a male suspect who had fled. The suspect, identified as NICHOLAS SLAVIN, 30, of New Bedford, and who was wanted by Norton Police on two warrants, had been last seen near a Holiday Inn located in the industrial park.

A witness subsequently stated that the suspect had entered a gray or silver sedan. Trooper Cory Melo, assigned to State Police-Middleboro, entered the industrial park and observed a vehicle matching that description. Trooper Melo and MSP K9 Section Trooper Christopher Thurlow, who had also responded with his K9 partner Devaney, pulled behind the suspect vehicle as it took a right on Bay Street. As Trooper Melo stopped the vehicle, which was a 2004 gray Audi Quattro, suspect SLAVIN, who was in the passenger seat, got out and ran into a plaza near a Dunkin Donuts and a 7-Eleven store. By this time, additional State Police patrols were responding to the plaza. Trooper Thurlow issued a warning that he would release his K9 if the suspect continued to flee.

The suspect continued to run and Trooper Thurlow sent K9 Devaney on an apprehension. At the same time, Trooper Nicholas Lorenco and Trooper John Pina rounded the corner of the plaza and assisted Trooper Melo in the pursuit.

The fleeing suspect, who was trying to scale a fence, then looked back at the charging Devaney and the converging Troopers, yelled “I give up,” and dropped to the ground behind a dumpster. Trooper Thurlow recalled Devaney as the dog reached the dumpster, and two of the other Troopers took SLAVIN into custody.

Troopers transported SLAVIN to State Police-Middleboro, where he was booked on the war