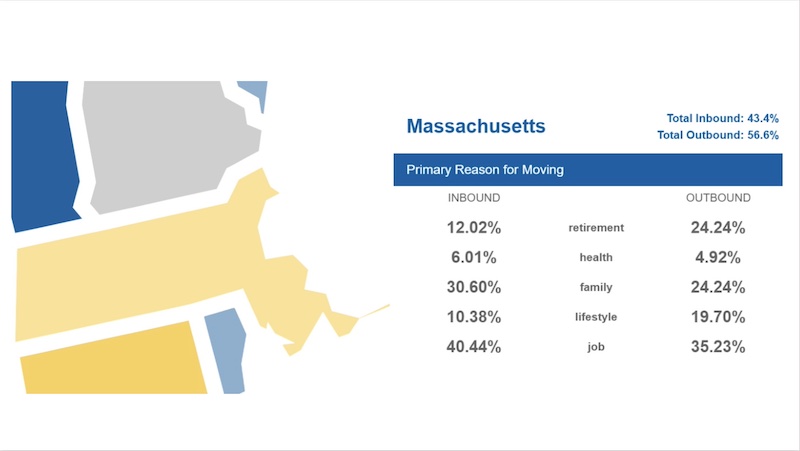 More people moved out of Massachusetts than relocated to the Bay State in 2020, with retirees and people seeking a change in lifestyle driving the overall migration out of the state, according to a recent study by a national moving company.

United Van Lines found Massachusetts to be one of the the top 10 states in the country that people were moving from as the COVID-19 pandemic accelerated people’s decisions to relocate and the years-long trend of people moving south and west continued.

“United Van Lines’ data makes it clear that migration to western and southern states, a prevalent pattern for the past several years, persisted in 2020,” said Michael Stoll, an economist and University of California, Los Angeles professor, in a statement released by the company.

“However, we’re seeing that the COVID-19 pandemic has without a doubt accelerated broader moving trends, including retirement driving top inbound regions as the Baby Boomer generation continues to reach that next phase of life,” Stoll said.

United reported that 56.6 percent of its Massachusetts business was from customers leaving the state, while 43.4 percent of moves were people and family relocating here, primarily for work or family. The company tracked 3,355 moves in and out of Massachusetts in 2020.

The Boston metro area did not make United’s list of Top 25 urban areas for inbound or outbound migration, but the Worcester-Fitchburg-Leomister area ranked 18th on the outbound list with 64 percent of movers leaving the region on a United van.

Customers cited work as the most common reason for moving to Massachusetts, with 40.4 percent of inbound moves related to a job, followed by family at 30.6 percent, retirement at 12 percent and lifestyle at 10.4 percent.

With the 2020 Census concluded, the U.S. Census Bureau estimated in December that as of July 1 the state’s population had held steady in 2020 at close to 6.9 million residents, down by about 1,300 people from its 2019 estimate. The full decennial Census count will not be available until later in 2021.

Of those leaving Massachusetts, 35.2 percent of United customers surveyed said it was because of work, while equal numbers of people (24.2 percent) said they were leaving to retire or for family. Another nearly 20 percent said they left for a change in lifestyle.

Retirees moved in the biggest volume to Delaware, according to the United Vans survey, followed by Florida and South Carolina.

Minnesota was the most popular destination for people moving for family, and movers decided Wyoming offered the best change of pace for their lifestyle. Nebraska boasted the highest percent of people moving in for jobs.

In New England, states saw different moving patterns over the past year.

Vermont, Maine, Rhode Island and New Hampshire all witnessed more moves into the state than out, with the numbers almost split in New Hampshire, while the two higher-cost states – Massachusetts and Connecticut – experienced the reverse.

Served 20 years in the United States Air Force. Owner of New Bedford Guide.
@NewBedfordGuide
Previous Dartmouth Mall to open up an Aldi’s grocery store
Next City of New Bedford and Police Department will adopt recommendations of Commission on Police Use of Force Policies