The Massachusetts State Police Violent Fugitive Apprehension Section (VFAS) recently determined that a man wanted for pistol-whipping a woman in Lynn in March was hiding in Los Angeles in attempt to avoid apprehension. Troopers from the MSP VFAS North Team relayed information they had developed to a United States Marshals task force, which arrested the suspect, 23-year-old HAKEEM RICKER, on Friday.

On March 13, 2021, plainclothes Lynn Police Officers responded to the pistol-whipping and attempted to stop RICKER, prompting a violent struggle with the suspect resulting in injuries to a Lynn Officer. RICKER, who at the time was on probation out of Suffolk Superior Court for firearms offenses, was able to flee on foot and discarded the handgun used in the assault.

Over the following weeks, Troopers from the VFAS North Team worked tirelessly to track RICKER by conducting surveillance and gathering intelligence. Troopers eventually developed information indicating RICKER was likely hiding in the Los Angeles area, and provided leads on his possible location to the US Marshals Service Pacific Southwest Regional Fugitive Task Force.

On May 7, members of that Task Force observed RICKER get into a ride service vehicle on the 1000 block of Flower Street in downtown Los Angeles. Task Force members stopped the car a short distance away and placed RICKER into custody without incident. Inside a red duffel bag that RICKER was carrying, Deputy Marshals located two handguns – one of which had been converted to fully automatic – large capacity magazines, and ammunition. One of the handguns was stamped with the words “NORTH CAROLINA LAW ENFORCEMENT D.N.R.”

RICKER was charged as a fugitive on three warrants, one which reflects offenses related to the pistol-whipping: assault and battery with a dangerous weapon, assault and battery on a police officer, unlawful possession and carrying of a firearm, use of a firearm in a felony, committing a firearm offense while having a prior conviction for a violent crime or drug crime, and resisting arrest.

The other two warrants, from separate incidents, charge RICKER with firearms offenses, assault, threats, intimidation of a witness, and violation of a harassment prevention order. 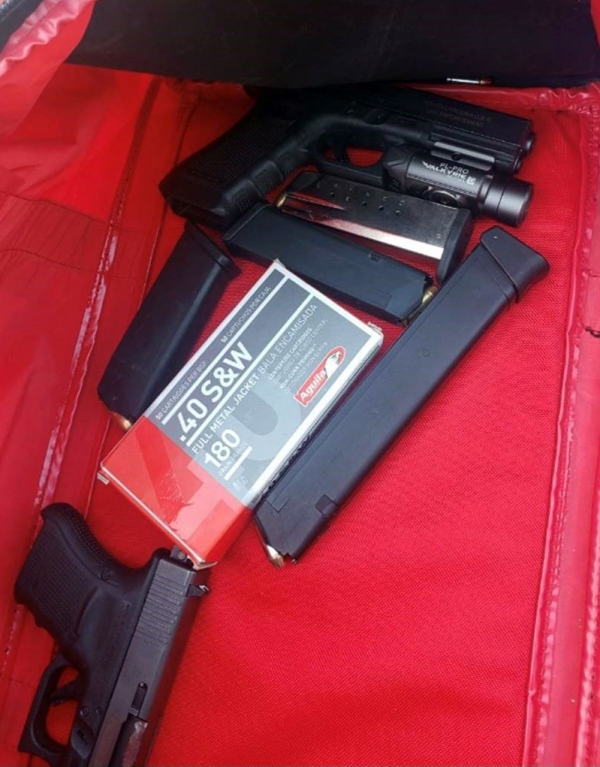