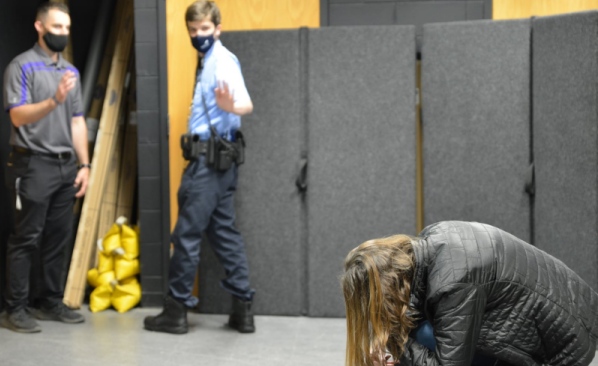 The SkillsUSA Championships are career competition events showcasing the best career and technical education students in the nation. Contests begin locally with a written test and continue through to the state and national levels. This past Friday, the state winners for Massachusetts appeared at the Blackstone Valley Regional Vocational Technical High School in Upton. The highest scoring participants will continue to the national competition held virtually later this year.

Ten regional Vocational and Technical students from area cities and towns, focusing their studies on Criminal Justice, and Legal and Protective Services were run through a gamut of scenarios, written testing, and a verbal interview.

Troopers and officers judged the students on what they have learned during their studies, to include: duty belts, traffic stops, public speaking, domestic violence situations, and how to act as if they were a police officer in different scenarios.”-Massachusetts State Police.

All photos by the Massachusetts Police: