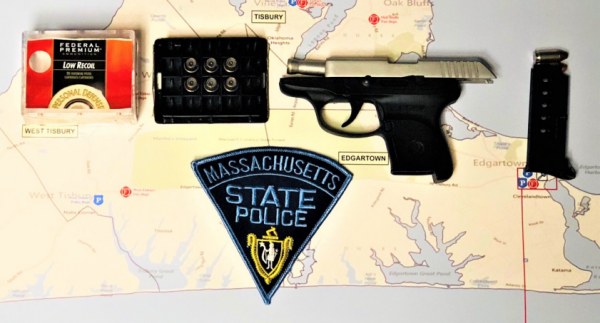 Shortly after 2 p.m. yesterday, Trooper Dustin Shaw, who is assigned to State Police-Oak Bluffs, was on patrol when observed a 2012 Mazda sedan with no inspection sticker pass him on West Tisbury Road in Edgartown. Trooper Shaw stopped the car in the area of Bold Meadow Lane, approached, and began speaking with the driver, a 25-year-old Oak Bluffs woman.

When the passenger, WILLIAM J. FILENE, 30, of Edgartown, opened the glove box to get the registration, Trooper Shaw observed, inside the compartment, a clear plastic box containing firearm ammunition. Trooper Shaw determined that neither of the car’s occupants possessed a license to carry a firearm or a Firearm Identification Card. While speaking to the Trooper, both occupants initially stated there was no gun in the vehicle.

After the discovery of the ammunition, Edgartown Police responded to back up the stop. Upon further questioning and investigation, the Trooper and Officers learned that FILENE did indeed have a firearm in the car and recovered a Ruger LCP Auto handgun with a .380 caliber round in the chamber and a magazine holding six more rounds. Additionally, the box in the glove compartment contained six .40 caliber rounds.