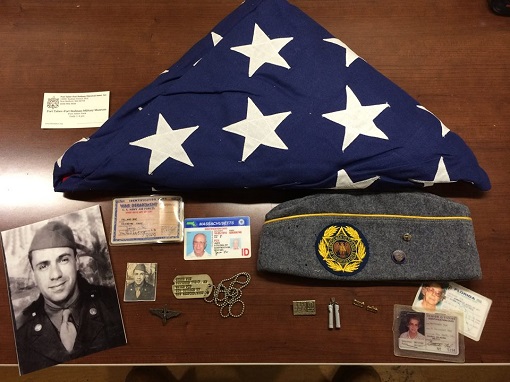 Volunteers at the Fort Taber-Fort Rodman Military Museum accept donations everyday from individuals who bring in memorabilia from relatives who want to honor their loved ones who have served in the military. Such donations come in the form of books, army uniforms, flags, and other items belonging to veterans.

Recently, someone brought in items that were found in a dumpster which belonged to James Fox who served in World War II. After a brief review of the items, the museum found that Mr. Fox had served in the US Army Air Corps. In addition, another volunteer at the museum was found who knew Mr. Fox and his family.

Mr. Fox, a successful businessman in the city died in 2009, but several personal items were recently tossed in a dumpster and were brought to the museum on July 31st. These items included the burial flag which was given to the family upon his death, his identification card as well as his late wife’s, his ID from his army service and several pins which included his mason pin, and pins identifying him with Jewish organizations, and his hat from the Jewish War Veterans Post 154, located here in New Bedford.

It is fortunate that these items were brought into the museum by an anonymous donor who just happened to find them in a dumpster; however, when items such as this are found, please do let the volunteers at the museum know how and when you find items such as this so that members of the family can be notified. The museum is only too happy to display items so that our local veterans can be remembered and honored in our city. The Fort Taber-Fort Rodman Military Museum will preserve and honor the memory of all those who have served our country by displaying their memorabilia identifying them with their service in the military.

** Update: Mr. Fox’s surviving 96 year old sister was located and informed of what occurred with her brother’s items. She was thrilled that they will be placed in the museum, and she provided a photo of Mr. Fox in uniform, taken in February 1942 in Macon, Georgia.

It was also noted that prior to the “donor” locating the flag in the dumpster, another individual found Mr. Fox’s medals and left with them. It would be fitting if Mr. Fox’s medals could be reunited with his other items here at the museum.