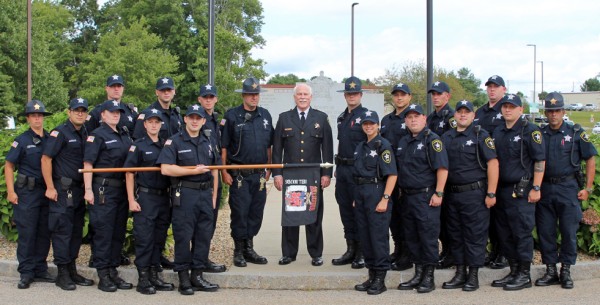 The cadets of the 44th Bristol County Correction Officers Academy walked out of the auditorium at GNB Voc-Tech Wednesday night to thundering applause and smiles from proud family and friends.

But before the graduates hugged and posed with pictures, they came together in a circle, put their hands in and celebrated together as a team.

“We started as strangers,” Class President Gregory Salvatore said in his remarks during the graduation ceremony. “From working together and studying together, we became a team. But it’s more than a team: It‘s a brotherhood, a sisterhood.”

For the past eight weeks, the 14 graduates received classroom instruction and hands-on application in everything from policy and procedure to defensive tactics and how to approach hostage situations. They received a full slate of first aid training, from CPR to being official First Responders, but the most important lesson taught by instructors Lt. Robert Matos, Sgt. Moses Isidoro and Corrections Officers Amanda Custodio and Robert Lavalette is teamwork.

“Eight weeks ago, I saw electricians, caseworkers, mechanics and food service workers, from 19 years old to 42, moving in different directions at different speeds,” Bristol County Sheriff Thomas M. Hodgson said of his memories from the first day of the Academy. “Today, I see one cohesive unit, one team of corrections professionals, with one goal: Make Bristol County a safer place to live, work and raise a family.”

Amaral was named valedictorian with a 96.41 grade average.

“It’s been an honor to share this experience with each and every one of you,” he told his classmates during graduation.

The class earned a guidon, a special marker used throughout history in the military and law enforcement to signify unit designation. The guidon is awarded by the training staff based on the class’ teamwork and togetherness; not every class receives the honor of carrying a guidon to graduation like this class did.

Academy Director Lt. Matos thanked BCSO leadership and his team in the training division, and urged the graduates to keep learning on the job every day.

“Your education does not end here. You’ll continue to learn and grow,” he said during the ceremony. “Find a goal and work towards it, whether it may be K9 or Special Investigations Unit or being a supervisor.”

The Bristol County Sheriff’s Office has openings in the next Correction Officers Academy, which is slated to start in early 2020. Anyone interested can visit http://www.bcso-ma.us/employment.htm for a job description and a downloadable application, or apply right on Indeed.com. For more information, please contact Caitlin DeMelo in Human Resources at caitlindemelo@bcso-ma.org or 508-995-6400 ext. 2344.