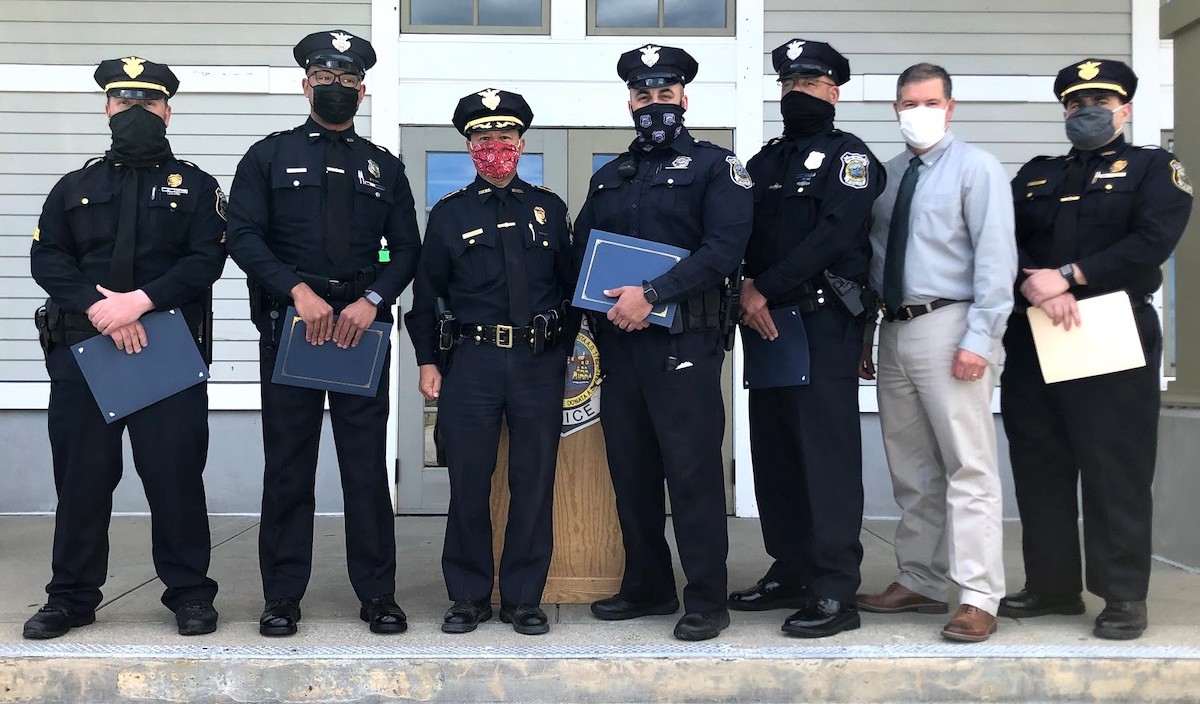 On Nov. 26, 2020 the Officers observed dark smoke south of their location. Following the smoke, they discovered a structure fire at 16 Washburn St. which had spread to two neighboring buildings. The Officers immediately exited the cruiser to assist and observed a woman trapped in her apartment and pleading for help. Repeated attempts to remove the woman through the window were unsuccessful. With little regard for their own safety, the Officers then entered the burning residence and breeched the apartment door. The woman was successfully removed from the apartment and escorted to medics. The officers continued to assist with the fire scene and escorted displaced tenants to safety and medical treatment.
The alertness, quick response, and subsequent bravery of both officers undoubtedly lead to the saving of this woman’s life. “Both Officers responded to the call of duty that day and made a remarkable sacrifice without any fire protective gear to save the life of another. Their efforts were heroic,” he added.

When Officer Allan Fonseca (who also serves as a Master Sergeant in the US Air Force) took on the challenge of organizing a bone marrow drive for more than 400 members of the US Military nearly a decade ago, he was aiming to succeed at a leadership class project. It didn’t occur to him that six years later he would be flying across the country on his own time to save the life of a 16-year-old boy that he may never meet.

During a leadership training exercise in 2012 Officer Fonseca was inspired by the program’s instructor, who shared that he was battling leukemia. When it was time to produce a community project as part of a leadership training program, Officer Fonseca came up with the idea of organizing a bone marrow drive and more than 400 of his fellow service people followed suit.

Fonseca using his own time, got on a plane and flew across the country to San Diego and underwent the first of two 6-day bone marrow extraction procedures. The second would take place in Providence a year later and under urgent timing when it was realized that the recipient required more marrow urgently.

“You took your own time and put the life of another first. The life of a stranger whose only hope for survival was a result of your selfless and noble act of honor,” said Cordeiro.
“Officer Fonseca, that class project you were aiming for in 2012 has far exceeded its goal. You serve as inspiration to us all and we are truly grateful for your service,” added Cordeiro.

In response to the devastation caused in south Texas by Hurricane Harvey, Sgt. Donald Williams took matters into his own hands, organized a massive collection of donations at HQ, led a charge of volunteers collecting items ranging from food and water, diapers, and clothes to support victims of the brutal storm.

He then ensured the goods were loaded onto UHAUl trucks and personally drove one of those vehicles to Houston, Texas, where he delivered the needed items dirtily to those suffering loss from the storm. Sgt. Williams then stayed on to assist in recovery operations.

“Taking on an operation of this magnitude was no small feat for any organized operation, but to come up with the idea and the desire to serve others in a way that was so personal is an indication of your true self and to service above self,” said Cordeiro. “Today we honor you for that service and for your commitment to always keeping your eyes open for opportunities to go above and beyond.”