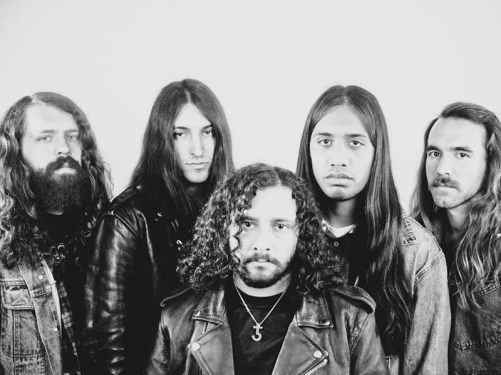 The Face of Doom: Bälam

Classic Rock in a Modern World
Distortion, ten minutes jams, and a whole lot of hair. No, you haven’t traveled back to the late 70s, but the spirit of the times is still alive and well for Doom Rock group, Bälam (pronounced bay-lum). Since December of 2011, the group has been making waves in the local underground scene and now looks to revitalize a movement of showmanship and cranking amps that began to fester in the mainstream around the time of Ozzy Osbourne’s infamous bat-beheading stunt.

Originally formed as a means for friends to practice their music together for separate projects, Bälam now stands united with a common purpose. They are looking to make a name for themselves doing just what they are meant to do: rock.

Together, the five man piece – consisting in traditional fashion of two guitars, bass, drums, and lead singer – is working to resurrect a cherished time in rock history, a time marked by fast living and faster progressions. The challenge they face, however, is staying current in a constantly fluctuating musical environment.

“My motivations are to leave a mark,” explains lead singer Alexander Carrellas, better known simply as Shimpy, and whose stage presence, energy, and vocal abilities mirror that of a young Ozzy Osborne peppered with Iron Maiden’s Bruce Dickenson.

“This day and age it’s easy to be quickly forgotten or written off as a passing attraction. I’d like to remind people that the pot can still be shaken up the way it use to.”

Internet sensations and overnight stars make the music industry appear as if the landscape has changed: that artists are able to simply put themselves out there and receive instant success correlated to their YouTube likes. Worse, streaming services like Tidal perpetuate false realities that musicians are now in charge of their own destinies. But outside of the 1% of select artists, most are still dependent on the old crutch of a record label for any sort of exposure.

To this rule, Bälam is no exception. Ready to fire out their extended play album, Days of Old, the members of Bälam feel they are in a position to unleash their voice, the only thing standing in their way is a lack of publicity.

A Need for Exposure
Zach Wilding, Bälam’s rhythm guitarist, passionately believes the band has the potential for success beyond the local scene. A scene filled with incredible talent, a supportive fan base, and excellent venues like Providence’s Dusk, The Met in Pawtucket, and No Problemo in New Bedford allow for a strong local following, but a lack of further exposure can prevent the band from elevating beyond this native renown.

“We just need to be more active,” adds Shimpy. “Touring, recording, putting ourselves out there. It’s really just about being desired. It’s important to move on up because it gives more opportunities in general.”

Their original label, Mordgrimm, allowed them the opportunity to record and release their first demo album, but other than that the label is limited in scope and recognition. With their new album on the cusp of release, the band looks forward to a larger reception.

As Wilding explains, “We’ve written about nine new songs that we are tweaking and getting ready to go back into the studio to record another record, so we’re going to be on the same boat again…trying to find someone to put it out. We didn’t really want to originally go with Mordgrimm again because we were hoping – still are- to impress a label who would do more for us promotionally speaking.”

The “more” which Wilding speaks of ranges from all aspects of the spectrum: production, marketing, and promotion. Smaller labels lack the ability to gain legitimate exposure for the artist, and so a reoccurring cycle hinders the band: the need for a label to produce material to eventually be taken into a new and larger label.

“One of the primary things a label wants in a promotional package is a bio,” explains Wilding. “We’ve had short ones, but none that are really appropriate for grabbing [a label’s] attention and thinking, ‘I need to see/hear this band!’”

Without this attention, the band will be slow to gain new followers. Further, in writing this bio, they have the difficult challenge of putting into words the raw energy and power they are able to project at a live show. So much of their image is rooted in a particular, seemingly outdated category, but their sheer presence allows them to break through genre standards or fan expectations and provide an awe-inspiring rock show.

This presence has created a strong reputation for the band, a reputation that allows them to consistently overcome difficult tasks like packing a house at midnight on a Tuesday, or reaching to a fan base beyond their prototypical genre limitations.

Levesque, a long time friend of Wilding, is deeply involved in the Rhode Island music scene both from performing with his own band and bonding with other local acts.

He elaborates on his description: “You’ll hear certain bands and it’ll sound like they lifted those guitar lines straight from like a Black Sabbath [song]. [Bälam] writes original things…but the sound, even the textures of the sounds, and the tones are reminiscent of a 70s band. And that’s effects, pedals they use, and that’s what shapes their sound.”

Continuing, Levesque believes “Their riffs are original but derivative. It’s one thing to emulate other bands. You can hear the influence, but it’s their own. It’s hard to describe. They’re not exactly reinventing the wheel, but they’re taking what worked for those bands and intensifying it.”

“I think the tones and the textures make them sound retro, and then the riffs themselves, although original, are throwback riffs. The way [Johnny Sage] the guitarist plays sounds chunky as hell, and that’s the overdrive he uses, a texture you put on the guitar.”

Admittedly drawing influences from iconic rock bands like Black Sabbath, Led Zeppelin, and Judas Priest, Bälam looks to meld this traditional feel with an updated sound of their own.

As Shimpy puts it, “All of the things that we enjoy from music we take out, dissect, rearrange and then send it back out.”

Although too young to have been alive to witness the classics first hand, each member of the group has grown up with their musical influences, and nonetheless resonates with this sense of nostalgia for a lost time.

The Look of the Times
From the beard to the denim suit to the tattered flannel, Wilding certainly has the look of yesterday down pat. A look he feels is not contrived, but organically a part of him and each of his band mates. “When we are all at a bar together or something, people know we are a band at first glance. I don’t think we consciously say, ‘We need to dress like this,’ but collectively, I think we definitely look like a 70’s rock band. Long hair and whatnot, and that’s what we are going for.”

This look is transferred to the stage. Their giant amps setting the background, the group flings their many feet of hair in perfectly timed head thrashing, as the packed crowd jams along, hands in the air as another aspect of the show.

“That’s another thing that’s overlooked,” adds Levesque, “How looks influence sound. People always overlook that, but when you see somebody dressed up a certain way on stage that’s what you’re prepared for. Like that bass player with the shirt open, the moustache, the hair. That’s why they have hair like that, that’s what they’re preparing you for.”

This is not to say that the entire composition of the band is simply to regurgitate the sounds of days past. While they realize their admiration for the high times of rock, they know they tread a dangerous line with their music.

According to Wilding, “We all love the classic sounds, you know? But as much as we all love that stuff, we are still trying to do our own thing and not become a carbon copy of bands that everyone already knows and loves. We’d like to remind folks of the golden era of rock n roll without sounding like a tribute band.”

A big enough hurdle in itself, projecting a personalized image is the easiest of challenges to overcome. Wilding explains, “I find that our songs have their own tonal voice. You might be able to listen to it and go, ‘Oh! I heard that riff in a Cream song,’ but ultimately it sounds like Bälam.”

Levesque adds, “They are like a modern day 70s band. They’re a little harder than a 70s band, more intense and extreme.”

Wilding continues, “I think a lot of great rock and roll is similar in the sense of what they are actually playing, what sets bands apart is how they play it and how they present it. So in terms of songwriting and style, we don’t deviate too far from the parameters of our influences, but we definitely have our own sound and style.”

“That’s a thing,” Levesque says on the subject. “Which bands are blending their influences well and which aren’t. That’s what makes a difference between people saying ‘oh this is a rip off’ and ‘this is nostalgic, that’s a retro band.’”

The Rock n Roll Life
Within this style of rock comes freedom. In a genre marked by showmanship and extreme fan devotion, the band is provided the unique opportunity to present itself however it may choose. Unlike most acts today that seem to be dictated by social media standards, the band still manifests the carefree attitude concurrent with the rock n roll life.

“I really like the idea that I can say whatever it is that I want and when I do it feels as good as it does,” Shimpy reflects. “It’s a form of power that many don’t get to feel. It is something I do for fun. It’s a very unique form of fun because it’s hard work but its still fun.”

Despite the fun, however, the band finds itself wanting more: to live out the rock and roll dream. As Shimpy puts it, “I would want to be at a point where we are playing all around the country and world while still having a good time and enjoying ourselves.”

He knows this is not going to happen over night, and the band continues on working towards their dream. “We are playing more shows now. Getting in the groove of gigging regularly. Also we are saving up for a good van so we can start doing our own tours.”

This dream may not be as far off as the fantasizing musicians seem to think. With a legitimate following along the east coast and budding recognition amongst local promoters, they are poised to make their desires a reality.

As Levesque states, “They usually go on third or headline [a show], and that’s for a reason, they’re building their following.”

Their following can soon translate to success, provided the right amount of luck. In the meantime, they seem more than happy to enjoy the ride.

They are currently prepping for their first appearance at the Maryland Doom Festival, looking to have a strong send off show tonight at Hope Underground in Newport. The show starts at 10pm. Admission is donation based with the intention of funding their journey. After having two scheduled gigs fall through at the last minute, this show will be a crucial event for kick starting their road trip. All are encouraged to come support the group and experience an incredible showcase of talent.