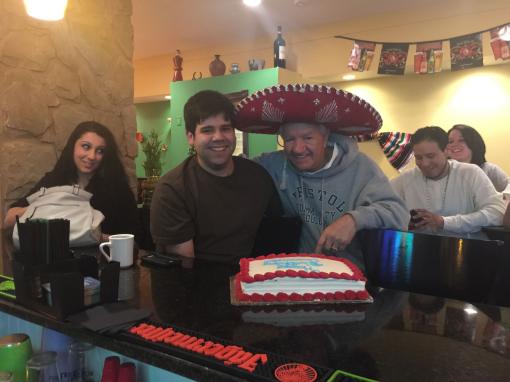 I have a deep seated love for authentic foods, and in particular Mexican food. Heck, I even like the neo-versions of Mexican food. What’s not to like? Mild spices….or if you prefer take-your-head-off spice – which for chiliheads like myself, that means we can get our fix if we need. All the meats are represented, but if you lean vegetarian or vegan, you can simply modify your order. Mexican food has this balanced approach to combining vegetables, meats, legumes and even fruit. It’s a food that appeals to everyone and Americans certainly love it.

I love the three main popular Mexican or Mexican-American eateries that we have in New Bedford, Fairhaven and Dartmouth. I eat at two of them regularly. So when I heard that a Mexican restaurant was opening up on the Avenue, about a mile from my house, I was reservedly excited. I held back a bit, because I felt that the other three places had already fulfilled what this area wanted in terms of casual Mexican food.

What I quickly found out, and pleasantly so, is that Adriana’s is unlike the others. It’s not a chain, it’s not a casual eatery based on take-out, but an genuine restaurant. It’s authentic Mexican food in an upscale setting. That doesn’t mean expensive or that you have to dress up, though you certainly can!

When it comes to Chinese or Mexican food, the take-out and/or buffets have really taken hold making us almost forget that there are fancy versions of Chinese and Mexican restaurants. There is a time and place where I want take-out, buffet or always casual. There is also a time and place that I want to sit in a luxurious, classy setting and have some “fancified” versions of those. Adriana’s is just such a place.

One of the primary reasons, I am really excited about Adriana’s, is that they serve Mexico’s national dish Mole Poblano – pronounced “molay” for you gringos and gringas. Mole is an incredibly sophisticated and time consuming sauce to make. Up to 30 ingredients or more, in a specific ratio, added in a methodical order are combined to make something that will tickle your tongue in a way it has never been tickled before. You will be whisked away to El Dorado, Omeyocan, or the Thirteen Heavens!

There is a lot of commonality like chocolate, chilis, cinnamon, clove, etc. but there is plenty of room for regional differences. All versions are luxuriant, rich and complex. I am a through and through, bonafide mole junkie. When mole is on the line, I will drop everything – it’s a just got “real” moment for me. Mole is serious business, indeed. It is to Mexico as red sauce is to Italy, or curry is to India. Mole is a part of Mexico’s history and can’t be separated. There are as many moles as there are people in Mexico and everyone will declare that their abuela makes the best. “Fact.”

You see, it has been around for centuries – in spite of the urban legend that the Aztecs were doing it. The Aztecs, certainly had chocolate or xocolatl, but is was something special or sacred as sacramental/communion wine is. The cacao seed was deemed as a gift from god (Quetzalcoatl) and wouldn’t be tossed into an everyday meal. Europeans didn’t look at xocolatl as a sacred ingredient. They combined the spices they love with xocolatl and one of the world’s greatest ingredients came out of a marriage of the best of the Old World and the New World.

General manager Martha Gonzalez, her daughter, Assistant Manager Adriana Giraldo, along with President Fernando Giraldo are not only some of the sweetest, friendliest people you’ll meet, but they run a professional, world class service. A perfect combination that translates into a great atmosphere.

Their recipes pay tribute to not just mole, but many of the traditional dishes of Mexico, like Sopa de Tortilla (Tortilla soup), flautas, sopes, and tortas/tortillas to name a few. Since Americans have come to expect certain things from Mexican eateries, Adriana’s does offer other Mexican favorites, and Tex-Mex like chimichangas, burritos, tacos, fajitas, quesadillas, nachos and one of my other favorite dishes on the planet, ceviche – Fish, diced tomatoes, onions, and cilantro, tossed in a lime marinade, topped with avocado and served with crackers. If you can’t decide, you can always get the Taste of Mexico – 2 Chicken flautas, 1 quesadilla, nachos, and jalapeños. Served with guacamole and sour cream.

Perhaps the most popular dish at Adriana’s is the Adriana’s Steak: a whole steak topped with sautéed tomatoes, onions, jalapeños and two fried eggs. Served with your choice of two sides. The salsa was NOT made in New York City. Chunky, light, fresh and made daily. This is not the glorified spaghetti sauce that many places and store brands try to pass off.

The menu is moderately sized one, broken into lunch and dinner, Mexi-kid’s, vegetarian, appetizers, sides, and desserts. Something for everyone. You can check out the whole menu, descriptions and prices here.

What Adriana’s does is bring the abuela factor to a local restaurant. You know, that grandma that has been cooking for 50 years and making dishes effortlessly and so delicious that even classically trained chefs are mystified and fail in their attempts to replicate? Everything I have eaten there, every time I have eaten there has had the abuela factor in spades. What is my measuring stick? I lived in Southern California for a year and ate Mexican all the time – by Mexicans that cooked for other Mexicans. This is the genuine article!

Adriana, Martha and Fernando chose New Bedford because they consider it their hometown and staying in New Bedford instead of a nearby town was never in question. Martha has a lot of faith in the direction businesses are going in the city and while the city isn’t there yet, she has “faith that one business at a time we can change that God willing.” This faith was born out of working for the New Bedford community in a variety of capacities over a 30 year period.

What else separates Adriana’s Mexican Restaurant from the other restaurants? Why should someone come to Adriana’s as opposed to another Mexican eatery in New Bedford or beyond? As you may have already concluded, it is very family oriented. Martha, Adriana and Fernando are all family, and also talk about their employees with considerable pride. I was introduced to each and every one of them by first name on my visit. They clearly see their employees as extended family. When you have a front end and kitchen that is happy and spreading the love, it spills over into the food and atmosphere translating into a smashing success.

In addition to the fabulous food, there is a full drinks menu that features all the classics like margaritas, martinis, mojitos, beer and wine, but has a few original drinks like Adriana’s mojito (Bacardi Superior Rum with Lime Juice and mint leaves). They serve a number of draft and bottled beers and of course Mexican beers like Tecante, Modelo, Presidento, Sol and more. Over 30 in all. If you are in a group, you will be delighted to find out that they serve beer buckets, and pitchers of beer, sangria, and margaritas. Yes, pitchers of margaritas!

In addition, there is aguardente if you are of the…ahem…clientele that enjoys that kind of thing. If alcohol is not your proverbial cup of tea, there are a handful of non-alcoholic choices like O’Douls, a Mexican Sunset, and Shirley Temples. Of course, there is coffee, espresso and cappuccino as well.

Martha shared a funny story about a day that she made some instant and regular customers. In the first week of opening, some sizzling fajitas coming to a table set off the fire alarm. They raced to get the key to shut it off, but by then the Fire Department had been alerted. Not surprisingly people kept eating – the food is so good that even a fire alarm will not stop you! Anyhow, the Fire Department arrived to a pleasant surprise: a Mexican restaurant that looked gorgeous and welcoming. They were so impressed that they requested a menu. They’ve been eating there ever since.

What Adriana, Martha, and Fernando have here is something special. An authentic family run Mexican restaurant that serves the genuine thing in an atmosphere that feels like home. Once you’ve sampled the mouth-watering fare at Adriana’s you’ll be adding another spot to your list of go-to Mexican restaurant destinations. Head down, tell Martha that hola and that Joe sent you!

When Joe isn't writing, he's coaching people to punch each other in the face. He enjoys ancient cultures, dead and living languages, cooking, benching 999#s, and saving the elderly, babies and puppies from burning buildings. While he enjoys long walks on the beach, he will not be your alarm clock, because he's no ding-a-ling.
Previous Editorial: Pulaski Elementary School needs a second street to enter and exit its property
Next School closings in south coast, MA – 9 Feb, 2015