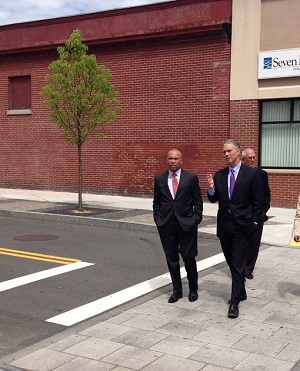 Governor Deval Patrick today announced $1.19 million in additional funding for the City of New Bedford through the MassWorks Infrastructure Grant Program to help support the Acushnet Avenue Improvement Project. Through the Patrick Administration’s strategic investments in housing and economic development projects, New Bedford has become an attractive place for residents and families to live, work and play.

This newest investment builds upon a strong partnership between the Patrick Administration and the City of New Bedford. In 2011, the city received a $3.2 million grant through the MassWorks Infrastructure Grant Program to support the Acushnet Avenue Improvement Project. The improvements included environmentally-friendly streetscaping, pedestrian scale lighting, attractive seating and planting areas, wider sidewalks, bicycle accommodations, safer and more efficient intersections and new fencing and plantings.

This public infrastructure project is part of an overall effort to spur private investment and development in New Bedford’s Acushnet Avenue International Marketplace District. The Marketplace serves as a gateway not only to the businesses along the Acushnet Avenue corridor, but also to the historic mill and river walk district of the Upper Harbor and the Riverside Landing development site.

This city intends to use these latest funds to catalyze local investment, support existing businesses along the commercial corridor and foster new business growth in the district. The funds will support street and sidewalk replacements, lighting, trees and seating, bike racks and bus shelters. It will also support the redevelopment of a long-vacant, city-owned parking lot into a pocket park.

The 2011 MassWorks grant also helped leverage $1 million in funding from the city for design and engineering costs for the project. The city also committed $3 million to fund water, sewage and drainage construction to advance improvements along Acushnet Avenue since 2011. The public infrastructure investments are expected to leverage an additional $102 million in private investment in the Acushnet Avenue area.

“We remain committed to working with local communities, like New Bedford, to help identify opportunities to maximize growth and spur regional development,” said Housing and Economic Development Secretary Greg Bialecki. “I look forward to our ongoing partnership with city officials and private industry leaders to explore additional ways to promote continued growth throughout the community and region.”

“Today’s announcement is a terrific example of the Patrick Administration’s thoughtful approach to economic development: We are carefully targeting infrastructure investments to encourage private investment and spark local economic growth,” said New Bedford Mayor Jon Mitchell. “We are doing it in a way which empowers local communities to identify and pursue their own goals. And we are building on a strong foundation by tapping the authenticity and diversity of a great neighborhood. When the textbooks are written about how to effectively advance an economic development agenda that really works, the Patrick Administration’s support for New Bedford ought to be a case study.”

“I am happy that these much needed grant monies for pedestrian friendly improvements have been awarded to the International Marketplace,” said Senator Mark Montigny. “The project will not only have a positive economic impact but will also improve the quality of life to the citizens of New Bedford while further enticing residents and tourists to partake in the many attractions our great city has to offer.”

The MassWorks Infrastructure Program is the consolidation of six capital budget programs, giving communities a single entry point and one set of requirements for state public infrastructure grants. The consolidation has improved efficiencies and streamlined the process, increased access for municipalities of all sizes, and enhanced state-regional-local partnerships around economic development and housing projects.

“I hope the next governor that we have in Massachusetts is as supportive as Governor Patrick has been to the New Bedford area,” said New Bedford City Councilor Kerry Winterson. “His continuing loyalty to this region has been extraordinary. His continued vision to make New Bedford a spectacular gateway city is second to none. And he will be truly missed. He is a constant advocate for small business growth as well as investment in our local infrastructure.”

Earlier this month, Governor Patrick filed An Act to Promote Growth and Opportunity, which provides $15 million for the creation of a Gateway Cities Transformative Development Fund. The fund, overseen by MassDevelopment, will bring growth and opportunity to Gateway Cities, including New Bedford, by enabling equity investments and technical assistance to support transformative development in these communities. Additionally, the fund will support the creation of collaborative workspaces to assist startups and entrepreneurs in Gateway Cities. The legislation creates tools and training so our workforce is prepared to meet the needs of employers, invests in our communities to promote economic development across the entire state and provides incentives to create jobs and stimulate the economy. The bill furthers the Administration’s proven growth strategy of investing in education, innovation and infrastructure that has led to record job creation in Massachusetts and has made the Commonwealth a global leader in key innovation economy sectors.

For more on the bill, visit www.mass.gov/compete.