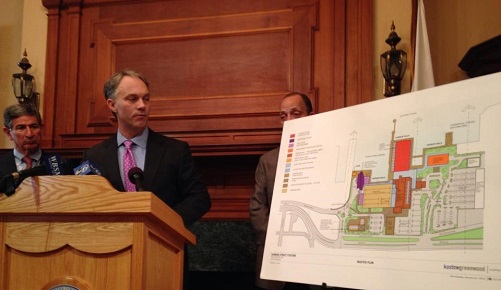 UPDATE: KG Urban has requested the citywide vote for developing a casino in New Bedford to be on 23 June, 2015. The city council would have to approve this date at a future city council meeting on April 23.  Our New Bedford Guide poll in March showed 67% of people were in favor of the casino.

At a press conference in New Bedford City Hall on March 19, 2015, Mayor Jon Mitchell announced that he has successfully negotiated and executed Host Community Agreement with casino developer KG Urban Enterprises that will allow KG and its operator, Foxwoods Resorts, to pursue a “Region C License” with the Massachusetts Gaming Commission to build a waterfront resort casino.

The agreement significantly advances a $650 million project on New Bedford’s waterfront which will feature a casino, hotel and conference center.  The agreement also provides a $4.5 million upfront payment to the City of New Bedford as well as $12.5 million in annual payments.  The project will include the $50 million remediation of a brownfield site, a $10 million harborwalk with public access to the waterfront, preservation of commercial fishing berthing area as well as the creation of a public recreational boating marina.

“I have been involved in countless discussions with potential gaming suitors to understand the fundamentals, the economics of gaming, design issues and a host of other considerations.  But, most importantly I have listened to the opinions of the residents of New Bedford.  The opinions run the gamut and range from absolute no to absolute yes under any circumstances, but the vast majority of New Bedford residents are somewhere in the middle.  They feel the devil is in the details.  This proposal gets the details right.”

He added, “Along the way we have asked the tough questions focused on one of the major themes of my administration and that is “think long-term.” We cannot make decisions out of desperation or haste if we are to succeed in the long run for our children and our grandchildren.”

Earlier this week, KG Urban and the City of New Bedford requested an extension from the Massachusetts Gaming Commission.  The Commission is meeting today and will take up the matter.  Mayor Jon Mitchell will attend the meeting and is expected to address the Commission.

Redesign of the Site Plan

KG agreed to a major re-design of their proposal to better integrate the facilities with the working waterfront and the downtown.  KG also agreed to a number of protections to ensure the vitality of the thriving downtown and historic district

A New Approach To The Downtown

Given its history and culture, New Bedford has been often been considered as a destination for such major conferences and public events but the City has lacked the capacity to accommodate these events and enjoy the economic boost they provide.  The proposal now includes a 25,000 square foot waterfront convention center which is unlike any other in Massachusetts. With the ability to host more than 2,000 guests, such a venue will in itself ensure that New Bedford and our waterfront are destinations for regional and even national events.

A new, safe, and attractive pedestrian connection along the harbor’s edge will be developed.  It will be the main point of integration between the site, the waterfront, and the downtown.  The design will be refined over the coming months and will be fully integrated with the City’s other long-term planning efforts.  Early proposals also called for acres of surface parking creating great distances between casino and associated facilities and the downtown.  With a new 5-story parking deck the lots have now been constrained and proximity to the downtown enhanced.

The downtown market has been on the rise for several years.  It is imperative that the casino benefits these local businesses and not detract from them.  The Agreement ensures that the casino operate far fewer square feet of retail and restaurant space in the Cannon Street site than typically found in casino operations.

The initial proposal called for a 23-story tower on the south site of the site.  The hotel has been redesigned to a maximum of 11 stories and moved much closer to the downtown to encourage walkability.

New Bedford is not Las Vegas, and signage on-site that advertises gaming is strictly limited as to not detract from how the site is seen from the historic downtown and neighborhoods.  Height limits have been put in place, and other restrictions will protect the water-facing facades.  To ensure the City’s highways remain uncluttered from intense promotion of gaming, no advertising of the casino will be allowed on billboards within the City.  Only if a competing casino advertises in such a manner is this restriction adjusted.

The Agreement limits the performance space on-site to 200 seats and requires KG to enter into a separate Agreement to provide support for the Zeiterion in advancing its marketing/promotions, programming and artistic mission, and reinforcing the important role of arts in the community.

An agreement was reached to guarantee there will be joint promotional programs for current and future downtown hotels.  In addition, a limit placed on the number of on-site hotel rooms (300) is expected to induce additional hotel development in the heart of the downtown.

A minimum of $50,000 per year of the Casino’s Reward programs will be spent in local businesses to encourage visitors to the casino to explore the fine restaurants and shops throughout the city.

A New Approach to the Waterfront

New Space for Commercial Fishing in the South

The City will be granted the right to develop the watersheet in the southern areas of the site for commercial fishing industry’s temporary berthing needs.  The Port of New Bedford is the number #1 fishing port in America, and space for vessels in the harbor is at an increasing premium as industry consolidation encourages more boats to deploy from New Bedford.  Use of these areas for berthing will provide needed relief.

New Recreational Marina in the North

New Bedford harbor has been recognized as one of the nation’s top fifty recreational boating destinations.  KG has agreed to permit the City to develop a recreational marina in the northern portion of the site to allow boaters full access to not only the gaming facility but the many nearby attractions of downtown New Bedford.  With the water sheet in this area boasting some of the deepest berthing opportunities anywhere in the harbor, the berthing of high-end yachts and other large vessels will bring a new class of recreational boating activity to the harbor. 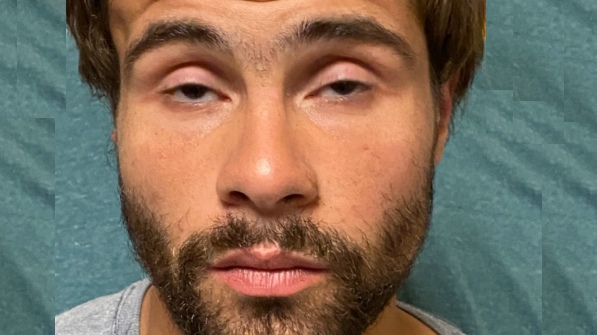