Yes, you can overdose on marijuana

Before you get triggered, this is not so simple and is far more nuanced. I know that many people who smoke marijuana are self-professed experts in oncology, anatomy, chemistry, quantum physics, biology, et al as well as all, any and every medical cure with multiple PhDs in all those fields, but I’m here to break the bad news: you’re not.

You may have read pro-biased articles, propaganda, and have black belts in Wikipedia and Google, but that doesn’t make you an expert and certainly doesn’t give you the right to deride, shout down, and even ridicule people who actually do have PhDs in those areas – something I see all the time. We need to listen to what they have to say, especially where science is involved.

Now, I’m not making the logical fallacy in the form of an Appeal To Authority, because experts can, and are, wrong. Sometimes it’s the interpretation of the data that is wrong. However, if you are going to badger these experts, their results or data, insulting them is not a form of evidence so you better use better methods if you want to be considered. Same goes for anecdotes or anecdotes passed on from others – they aren’t evidence. 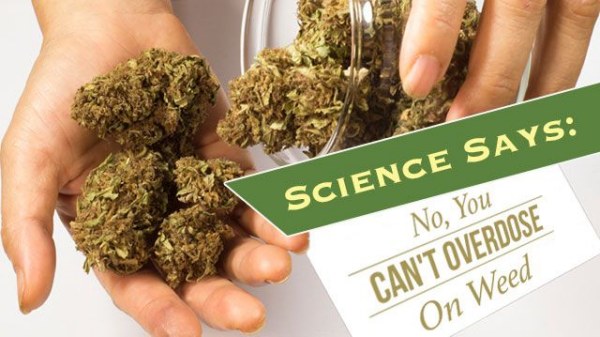 Overdosing usually conjures up images of someone lying in a near-death state with EMTs surrounding them providing CPR or Narcan to bring them back from the brink. We often think in symbols and images, and this is one of those times. The definition of overdose is: “an excessive and dangerous dose of a drug” or going “over” the safe or normal “dose.” It doesn’t say anything about dying.

I am not necessarily stating that marijuana is bad for you, but that taking too much can be bad for you or others. In normal or recommended amounts it can be good for you. I am pro-marijuana and all for not only local government, but the federal government decriminalizing and legalizing it. Keep in mind, this is coming from someone who dislikes marijuana and doesn’t use it. However, while I’m not implying that it is “bad” for you, too much of something can cause harm or death. Oxygen and water are very good for you, but you can die from too much of them – oxygen poisoning and hyponatremia. It’s a matter of dosage and overdosing in the case of marijuana means taking too much THC.

So throw the image of some druggie, or one near death, into the rubbish bin because that is not what I am suggesting, implying or saying.

But you can still overdose. You can have a bad experience, become nauseous, vomit, have a panic or anxiety attack, dizziness, have an increased heart rate which could aggravate any health condition you have. None of which are good if you operating a motor vehicle that can injure or kill someone, even yourself. You can actually overdose on anything as I mentioned above and the lethal dose for marijuana would be “40,000 times the effective dose.” So, if that is let’s say “half a joint” – assuming you know what moderation is – it would take you smoking 20,000 joints or its equivalent (through edibles or dabbing perhaps) in order to die. How many cookies or brownies would you have to eat to equal 20,000 joints? You’re more likely to be hit by lightning or win the lottery and people who promote that nonsense are just trying to push their cause. 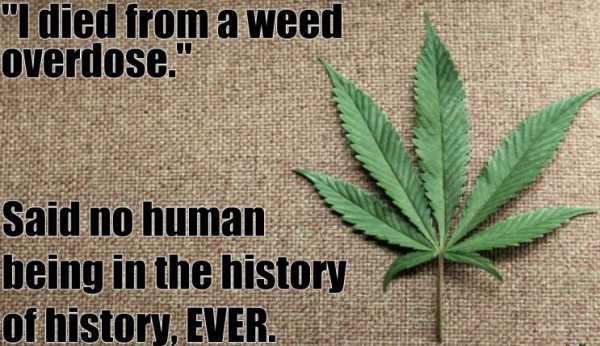 The logic that some pro-marijuana folks use. If you don’t get it – you might be stoned.

Now, if you are from the anti-marijuana crowd and think people are overdosing and dying from it, you are just flat out wrong and would need to provide evidence. Even if one or two people were said to have died from overdosing, considering the billions of people that have smoked massive amounts of marijuana and not died, one or two people dying compared the thousands a year that die from alcohol poisoning should be more important of an issue for you to campaign against. Again it’s dosage: you may be able to drive after one drink (legally and in terms of capability) but increase that and you are at risk by the law or to yourself.

Opioid receptors are located in the areas that control respiration – the brain and heart – so overdosing will affect your breathing which can lead to death. Cannabinoid receptors are located throughout the body. That may not translate into stopping our breathing and the death of your body, but it does translate to the death of your intelligence momentarily. People who smoke far too much become dysfunctional lumps of uselessness. They slow down, they don’t think as clearly in spite of the urban legend that you feel you think more clearly, and the few THC-induced deaths that have happened have come from the aforementioned dizziness, disorientation or mental dysfunction that comes with too much.

For example, a 19-year old Colorado man jumped off a balcony to his death after became disoriented right after ingesting marijuana cookies. Dabbing or waxing is an easy way of ingesting too much THC and passing out which has obvious dangers, especially if you are driving. This article mentions a number of 911 calls that were made a pro-marijuana conferences and “cannabis cups” where people had passed out while standing or walking and sustained injuries that range from smashing out their teeth or smacking their heads open. 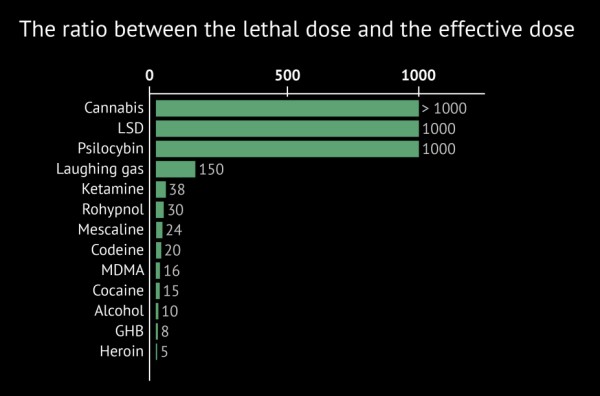 While visiting Jamaica on vacation, I witnessed this very thing at Bob Marley’s estate when a few twenty-something American kids each purchased a joint at the entrance to the estate which features a restaurant, cafe, tourist shop, etc. Instead of sharing, each of the three friends smoked their own and apparently that was far too much for one kid who simply closed his eyes and passed out while standing and took out a table and chairs. Luckily he wasn’t seriously hurt in the fall, but his two friends thought he had a heart attack and died and went into a panic. He woke up a few seconds later asking what happened and they all had a laugh.

While I dislike marijuana, after decades of being around friends and family that smoke marijuana I have never seen anyone overdose in the sense that something seriously harmful happened to them – they just slowed down and became useless, which isn’t my “cup of tea.” Moderation seems to be the smart thing to do if you want to enjoy some of the many benefits that come from its usage, but it seems that many smokers have no idea what moderation is.

Like just about anything, if you abuse it or misuse it you run some risks and that is a human issue based on ignorance or stupidity and not one of THC itself. That moderation goes both ways and if you listen to the self-professed experts long enough there will literally be nothing under the sun that can’t be cured. No proof, evidence, even reasoning is necessary for these beliefs. People believe stupid things – the Flat-Earth Society has millions of members.

Healthy scepticism should always be maintained. Too much and the cynic thinks they have the mysteries of the world figured out and so stop searching for answers and too much and gullible people just accept what they are told to be true without investigation. A sign of intelligence is listening to an idea or concept and testing it before casting it aside and that’s what we see today when people state “It’s impossible to overdose.” or even ridicule it with “What did they do? Eat a bunch of chips and pass out?” 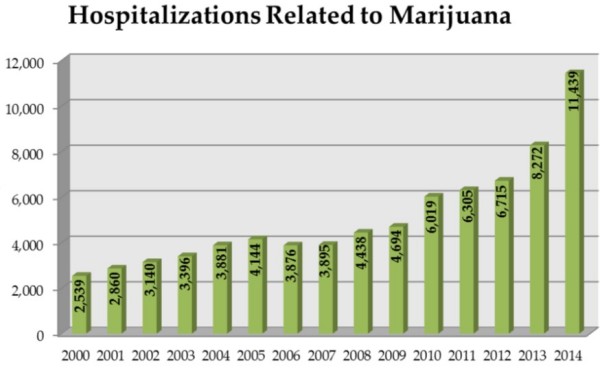 “Scientific research has linked marijuana use to a range of significant adverse effects on health and well- being. For example, its acute effects during intoxication interfere with cognitive and motor processes needed for driving a vehicle, and thus marijuana use significantly raises the risk for automobile accidents. Frequent marijuana use during adolescence may have a prolonged or even permanent deleterious impact on brain function and may jeopardize a young person’s educational, professional, and social achievements. …”- Dr. Nora D. Volkow, Director National Institute of Drug Abuse

There is a huge difference between wanting something to be true, and it actually being true. I assure you that those people that overdosed and had 911 called because they either injured themselves or someone else – didn’t think it was too funny. Letting an idea like “You can’t overdose!” perpetuate will give ignorant (not meaning an insult, but as in not knowing something) people carte blanche to smoke far beyond a reasonable amount – overdose – and become disoriented, dizzy, or ill while behind a car and that’s good for no one.

People love to point to statistics that show the number of deaths from overdosing on marijuana being zero, but how many car accidents or stunts that injure or kill someone have been caused by someone stoned out of their gourd and it isn’t reported because who would admit that they were stoned?

It is for this reason that testing devices similar to alcohol tests are being devised to accurately test the THC level of a driver who has been in an accident or driving erratically. This is due to statistics that show an increase in car accidents by people who drive stoned. A simple Google search will lead to many state-wide statistics demonstrating that it is a genuine problem that needs to be addressed.

While no one is going to die directly from too much marijuana intake, having too much – overdosing – can lead to things that do result in harm. So therein lies the rub: while you would need to take in a nearly impossible amount of THC to overdose and die it’s irrelevant, you only need to take enough to make you a danger to yourself or others and that is how injuries and deaths can be attributed to marijuana.