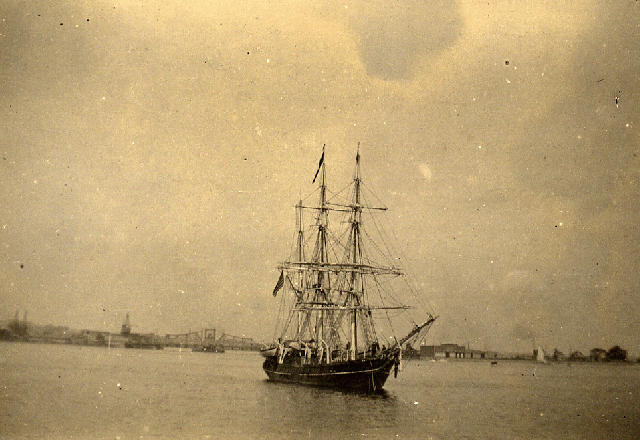 Welcome to the inaugural installment “Floating Factories: Whaling Bark….”! In this series we will attempt to shine some light on those sea vessels that served as a business, home, and symbol of the greater New Bedford area’s prosperity, culture and history. Of course these vessels were nothing without the investors, captains, and seamen that served on them and they will get equal “face” time if the available information allows us to spotlight them.

Often I come across a snippet of history about a vessel, often just an image with one short caption attached, or a blurb about a person who served as a captain. Far less common are images of the hardy seamen, and even rarer are these photos accompanied with identification. Not to take away from the investors and captains without whom the whaling industry would have never even got off the ground. (Pun intended?) Equally as responsible for the continued growth of the industry and the prosperity of the city are the unnamed crews that seldom get coverage. These unsung heroes never seem to get in the spotlight. These two facets were interdependent and neither could have succeeded without the other.

The captains of these vessels typically become the celebrities and books have been written and portraits have been painted and taken by camera. There is no real point in covering the same old ground, since the information is easily found and readily available. Of course, this does not mean their contributions and stories have to be excluded, however they will not be the central focus and detail will not be heavy. The one common ground these two groups share is the whaling vessel they call work and home. This is the reason we will use the whaling vessel as the reference point or central theme.

However, I digress. The point I am trying to make about finding an image of a vessel here, a portrait of a captain there, and a snapshot of an unnamed crew, is that they are never compiled or placed together. They always seem to be found in isolation. Here I’d like to put them back together again, as they belong. Crew, captain, and investors back together with their vessel. Taking a trip back into time to see what it was like to be a captain, whaler, deckhand and then tie it all together with some fascinating old photos.

An Appeal for Participation
To give the crewmen their due, I will mention the most notable names, surnames that are commonly found in this area so the reader can see if one of their predecessors sailed on the vessel, and anything that stands out. I will also link to the New Bedford Whaling Museum’s Crewmen Database for those who want to find out more about the crew like age, physical characteristics, country of origin, etc.

As I have mentioned in other articles I have authored, I not only welcome corrections, criticism, and feedback, but plead you for those contributions. Any anecdotes that can be shared just make the article that much more alive. There are so many people in this city that are walking encyclopedias of local history that for them to remain silent would be a shame. So please, by all means, let’s open up a two way dialogue and get some discussion going. This topic contains a LOT of knowledge that is new to me since I am not a seafarer, by any stretch of the imagination. I am learning and hoping to continue to learn more with your contributions and our discussion. My proverbial cup of tea is empty. Enjoy!

What is a “Bark”?
For the very first installment, I took a very random approach with the selection. Choosing the whaling bark Bertha has no method, or purpose. I wanted to see where it would take me. First thing to clear up is the term “bark” that I get asked a lot about. Unless you spend a lot of time on the water, or reading about history, this is a word you never encounter in this context. What exactly is a bark? Why was a word chosen that is a common every day word for the outside skin of a tree? This is one homonym that has created a lot of confusion.

For practical reasons, lets do this in layman’s terms. Sure, there are sailing snobs who will tell you about every detail and nuance and speak for 30 minutes on what a bark is exactly. You’ll be left dizzy, more confused than ever and with even more questions. So let’s keep it simple. Let’s not got too far back, but suffice it to say the word “barca” came from Latin. In French it became “barque.” In American English it became “bark” though England still retains the French spelling. Let’s leave it at that.

Physically speaking a bark is a ship that has at least three masts. We could “snob out” and tell you about all the varieties of rigging, but suffice it to say, the forward (or “front” in layman’s terms) two masts have square sails. The third mast is on the stern, or rear of the ship, and is called a fore-and-aft sail. For you clever readers, you may have noted that fore-and-aft are truncated versions of “before” and “after.” This sort of rigging made the ship easier to handle leading to many ships being re-rigged as barks especially when whaling as an industry took off. It took a minor amount of work and was economically feasible, thus a no-brainer.

A bark was on average a 300-325 ton vessel. That’s quite a large vessel for the time that whaling predominated, the 1800s. The reason these vessels were this large was because it wasn’t uncommon – get ready for this – for the voyage to take up to four years.

“…white oak frame, is copper fastened…”
Now the vessel that is relevant to this article, Bertha was relatively small. Somewhat ironic considering her name which usually has “Big” precede it on common parlance. Her size meant she could be out to sea for a far shorter period of time if the right harvest was brought in quick enough. Bertha was built by Samuel Dammon right here in New Bedford in 1877 and whaled until she was lost at sea off Cape Verde, Africa, April 23, 1918. She was launched from Rodman’s Wharf, had a deck length 100 feet, overall length 107 feet, breadth 25 feet 10 inches, depth 11 feet 6 inches, and 177 tons. The Whaleman’s Shipping List describes her with a “…white oak frame, is copper fastened, and is in all respects equal to the vessels previously built by Mr. Dammon, which have had a high reputation on account of their durability and excellent sea going qualities.”

Bertha spend most of her time whaling in the Azores, all over the Atlantic, the Southeast Pacific, Cape Hatteras, Callao, Peru, Galapagos Islands and the Caribbean. While her primary harvest was baleen and sperm (toothed as opposed to whales with baleen) whale oil, she also harvested some bone, baleen proper and ambergris.

Ambergris is a highly prized and valued biliary secretion from a whale’s intestines that can be found floating in the open seas where whales have passed through. While fresh or new ambergris has an awful odor, was it ages it acquires a rather pleasant and sweet aroma. While this highly flammable substance could be used as fuel, its unique aroma made it a commodity for perfumes. As a matter of fact, it is still used in some perfumes today. In total she brought in 23,648 barrels of Sperm WhaleOil, 1,128 Barrels of Baleen Whale Oil, and 4,568 of Bone and Baleen.

Of Owner-Agents, Masters, and Salty Dogs
John F. Tucker & Company and James F. Avery were two of the owner-agents that I could find on record. Bertha had 257 crew members and 12 captains on her 15 voyages:

In discussing her crew, the most notable names found were William C. Clark. Frederick H. Delano, Philip G. Howland, Edward E. Lund, Antonio Martins, Manuel Merril, Horace E. Nash, Frank E. Taber, William Tillman, and Charles Washburn. These fellows became prominent individuals later and/or had a street name dedicated to them. The surnames that could be commonly found and could be a predecessor of yours were Almeda (Almeida), Antone, Bender, Bennett, Brown, Cardoza, Delgado, De Pina, Derozario (Derosario), Dias, Duarte, Faria, Fortes, Gifford, Gonsalves, Gomes, Joseph, King, Lopes, Mello, Nunes, Pereira, Piva, Silva, Silvia, and Sylvia. The oldest crew member was a Joseph L. Mattes from New Bedford at 65 years of age and there was a child and a very young teen Antonio Jacinta Valente from Sao Miguel, Azores who was 11 years old (who was recorded as 5’5 1/2 ” and most likely bluffed his age) and Henry Sennea who was 14.

A Failure to beat Windward
An anecdote I came across online told the story of a particular voyage that seemed to be cursed or had a proverbial black cloud follow it. This particular journey was heading to the “Western Grounds” in the Azores. They were hardly a few days out when equipment began to break down. It took over a week out at sea before they realized they had no matches on board. Within a fortnight the smoke stacks for the trying of the blubber broke down. How this happened is unclear, but what is clear is that they were completely unusable and they had to improvise since they had to capture what whales they came upon and had to try out.

When they arrived at St. Antoine the blocks, try pots, and windlass broke down. The nearest place to purchase new pots was Barbados. The problem was with all the break downs, and faulty equipment they were incapable of beating to windward or sailing upwind. This meant 103 days with no whaling! I’d imagine the Bertha must have felt like a prison at this point.

Sweet redemption was at hand though and the next 10 months brought in a modest harvest of 597 barrels of oil. Payday. Perhaps not the amount that would have made everyone relatively wealthy, but covered expenses and made the “cursed” trip a worthwhile one. Of course, this was not an altogether uncommon story amongst the many hardships whalers would encounter on their long forays on the world’s oceans. As for the Bertha’s demise, beyond the fact that it went down at Cape Verde, in 1918 there is little more available. In all likelihood a storm, perhaps combined with poor maintenance as the above anecdote implies, contributed to her ruin.

Thus is the story of the Bertha and her 41 year life, her owner-agents, her masters and salty dogs!

12►
* All Photos Courtesy of the New Bedford Whaling Museum
Share

When Joe isn't writing, he's coaching people to punch each other in the face. He enjoys ancient cultures, dead and living languages, cooking, benching 999#s, and saving the elderly, babies and puppies from burning buildings. While he enjoys long walks on the beach, he will not be your alarm clock, because he's no ding-a-ling.
Previous The South Coast Hot Jobs List – 26 February, 2013
Next March’s Portholes Project: Women in the Industry