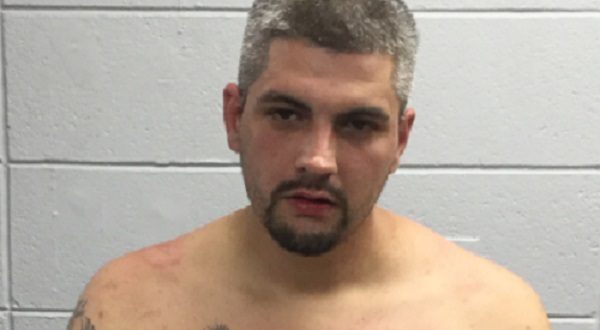 On Monday at 5:58 pm, Wareham Police officers responded to a serious accident in the area of 271 Plymouth Avenue.

Officer Nate Aronson arrived to find two vehicles involved with one overturned in the street with injuries. Also arriving at the scene were Special officers Justin Silveira, Craig Oliveira, and DNR officer Josh Kimball. After investigating, it was determined that a vehicle driven by Ralph Hunter, 33, of Everett had lost control after going off the side of the road, striking a stump, and then striking another vehicle before rolling over.

During the course of the investigation, it was determined by officers that Mr. Hunter was operating under the influence of liquor, and he became very unruly at the scene, waving his arms, yelling, and causing a spectacle. According to police, Mr. Hunter resisted arrest and three officers were needed to handcuff him. He is being charged with, operating under the influence of liquor, negligent operation of a motor vehicle, speeding, failure to wear a seat belt, disorderly conduct, disturbing the peace, and resisting arrest.

During the transport to the police headquarters, Mr. Hunter slipped the handcuffs from behind his back to his front. At the station, he needed to be escorted in by Sgt. Noble and Officer Blaise Lallie, due to his belligerent and combative attitude. He is due in court for Tuesday, July 10, for arraignment. One person was transported from the accident to Tobey Hospital with minor injuries.

Served 20 years in the United States Air Force. Owner of New Bedford Guide.
@NewBedfordGuide
Previous New Bedford’s Festival Theatre to present American classic, “West Side Story”
Next OPINION: Litter and issues at East Beach: “We have to do better, we are better than this.”