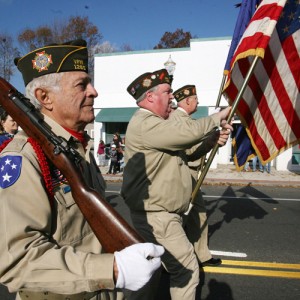 On behalf of the citizens of New Bedford, we would like take this opportunity to thank you for your service to New Bedford and to the United States. We believe there is no greater demonstration of the commitment to serve than membership in the United States Armed Forces.

Twice a year, the community comes together to honor that service in a visible way at the Memorial Day and Veterans Day parades. Veterans and active service members march in solidarity as the larger community stands along the parade route to show their appreciation. These are key community building events in New Bedford, and we’re grateful for the Veterans Council for organizing them. We would just like to see them bigger and better, so that the size and quality of the parades are reflective of the enormity of the service they are meant to honor. It is important to us to honor your service in appropriate fashion, and to demonstrate to children in the crowd that military service is both noble and central to our country’s continued success.

This year’s Veteran’s Day parade will be held on Sunday, November 11, 2012. We would like to increase active participation in the parade by asking you to march, and to encourage you to invite your friends and family members to join the audience in a show of support. We’re pleased to announce that the 215th Army Band will march and perform at this year’s parade.

The Veterans Day parade will begin to form up at 9:30 at Union St. and Rockdale Avenue, and the parade will step off at 10:00 AM.

If you plan on participating in the parade please contact NB Veterans Services at 508-991-6184.

Please give us your name, telephone number, branch of service and Era of service i.e. WWII, Korea, Vietnam, Peacetime, Persian Gulf, OEF, OIF or OND. You can also see Mr. John Moniz the day of the parade.