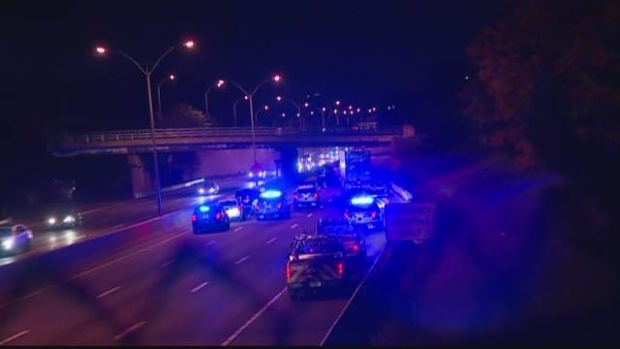 The Massachusetts State Trooper whose cruiser was struck by a tractor-trailer on the Mass. Turnpike last night received emergency treatment at Massachusetts General Hospital and was released this morning. The trooper, a 44-year-old male assigned to Troop E, suffered injuries that will require follow-up testing and care.

The tractor-trailer operator faces charges in connection with the crash.

The trooper was inside his cruiser, a 2013 Ford Expedition (not an Explorer as was initially reported last night), when it was struck by the tractor-trailer. At the time it was struck, the trooper and cruiser were parked in the right lane just beyond the Interchange 17 ramp in Newton, with the cruiser’s emergency lights activated, protecting a road construction crew.

At 9:40 p.m. the MSP Expedition was struck from behind by the truck. Investigation by Troop E of the Massachusetts State Police and the State Police Collision Analysis and Reconstruction Section indicates that the force of the impact pushed the Expedition from the right lane across the center and left travel lanes, where it struck the median guardrail. Both vehicles suffered heavy damage and were towed from the scene.

Preliminary investigation indicates that the truck operator failed to move over for the cruiser and construction detail.

The truck is a 2014 Freightliner registered out of Indiana and owned by the Swift Transportation of Company of Arizona. That company has a business address of Gary, Indiana. The operator is identified as AL B. HUGHES, 32, of New Britain, Conn. He is being cited for failure to move over for an emergency vehicle/road crew and failure to take care in stopping.

No further information is being released at this time.