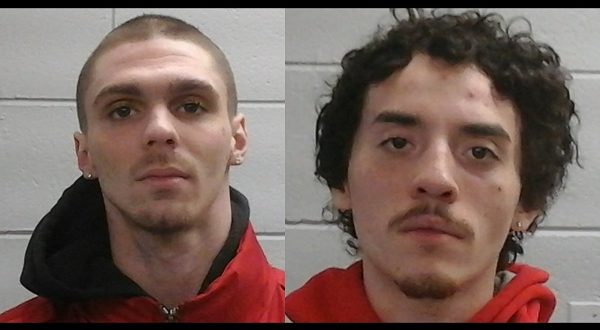 On Wednesday, March 7th at approximately 1:00 pm, Wareham police officer Chris Smith noticed 2 males carrying a large, covered item in the area of Sandwich Rd. and Main Street. Upon seeing the officer, the males quickly made their way to the rear of a building and attempted to duck out of sight.

The item was located behind the building and determined to be a large TV covered by a blanket, which investigators later determined was stolen from a nearby residence.

Officer George Chandler arrived on scene and assisted with locating the two males, who were found behind a nearby building. When they were located, officers noticed currency floating in the water in the immediate area of the men and recovered the bills, which were determined to be ten counterfeit $100 notes.

The two men, 22-year-old Ryan Hanscome of East Wareham and 18-year-old Xavier Hernandez of Wareham, were placed under arrest at the scene. Both were charged with Larceny Over $250, while Mr. Hanscome was additionally charged with Possession of Counterfeit Notes as a result of further investigation.

The arrested males were arraigned on the criminal charges at Wareham District Court later in the afternoon.