The National Weather Service has reported a tropical storm developing off of the Carolinas that is heading towards southern New England late Friday bringing with it torrential rainfall and flash flooding.

“This will likely impact the region late Friday into Saturday with heavy rain, potential flooding and perhaps isolated severe weather, which all depend on the exact track and strength of the system. Beyond Saturday, things remain unsettled, with periodic shower and thunderstorm chances through the first half of next week.” the National Weather Service said.

Currently located 50 miles of the coast of Wilmington, North Carolina, the storm has an 80% chance of becoming a tropical storm at some point today or tonight. Forecasters predict the storm will move toward the North Carolina Outer Banks later tonight before heading north hugging the east coast dumping heavy rainfall leading to flash flooding, powerful wind gusts, and thunderstorms. 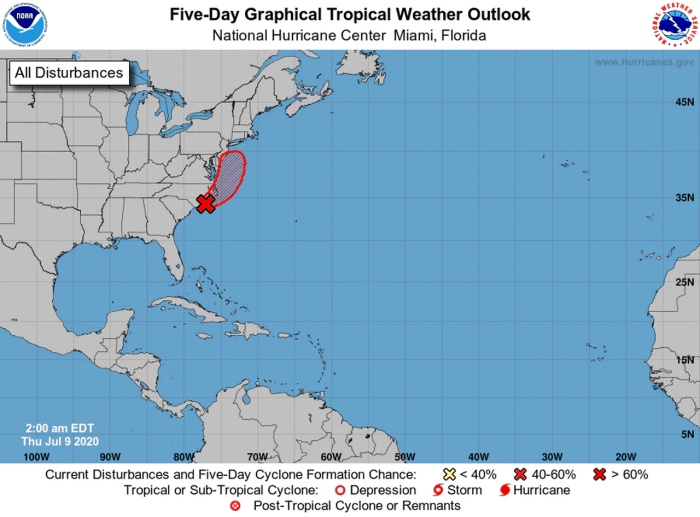 When Joe isn't writing, he's coaching people to punch each other in the face. He enjoys ancient cultures, dead and living languages, cooking, benching 999#s, and saving the elderly, babies and puppies from burning buildings. While he enjoys long walks on the beach, he will not be your alarm clock, because he's no ding-a-ling.
Previous Massachusetts Environmental Police arrest one, cite two for fishing violations
Next Wareham Police arrest two disorderly and belligerent women in three separate incidents