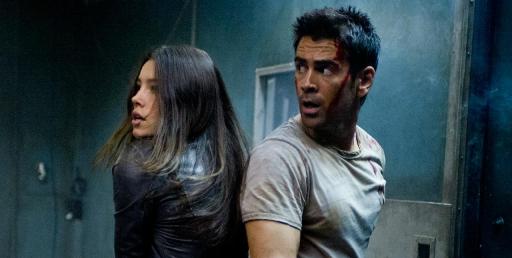 Sometimes a movie comes out and despite awesome effects, huge promotional efforts and a compelling cast it still bombs at the box office.  Such was the case this weekend with Len Wiseman’s newest sci-fi thriller Total Recall, a remake of the well-known 1990 Schwarzenegger film by the same name.  Total Recall only grossed $26 million domestic in its opening weekend, which is a weak showing.  $26 million is an especially disappointing start when you consider that Wiseman’s last movie, Underworld: Evolution (a movie with far less advertising and less than half the production costs) made nearly a million dollars more in its opening.  So what went so wrong with Total Recall?  You’ll find no answers here; I thought the movie was pretty awesome.

As a brief recap from the trailer, Total Recall is about Douglas Quaid (Colin Farrell), a factory worker living in a small apartment in a dystopian society with his wife (Kate Beckinsale).  Disillusioned by his boring life and plagued by nightmares of doing something more meaningful, he decides to try “Rekall”; a service that allows people to experience exotic memories.  The experience at Rekall jolts Quaid’s memories and brings him to discover that he has an erased past as a highly valuable spy.  Quickly everyone (including his wife) seem to be out to kill him and his only ally is a woman he can only remember from his dreams (Jessica Biel). 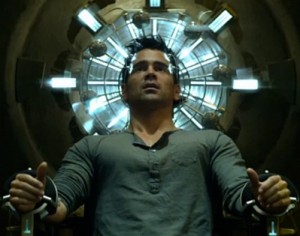 There are different trains of thought on why Total Recall had such a disappointing opening.  One theory says that Colin Farrell has lost his A list appeal, and Kate Beckinsale and Jessica Biel aren’t high ranking in Hollywood either.  This shouldn’t mean anything though; they are all well suited to action/sci-fi roles, and that’s purely what Total Recall is about.  It’s two hours of essentially non-stop action, which is what Len Wiseman is a master of. The visual effects are stunning, the action sequences are inventive, and there are equal parts hand-to-hand combat and gunfire, which keeps it interesting.

Another theory on Total Recall’s low numbers is that the original doesn’t have enough of a fan base to interest moviegoers.  Whether you loved or hated the original (or never saw it), it hardly matters because Wiseman did a lot to reimagine the plot and setting.  Total Recall takes place in a world where most of the Earth is uninhabitable and those who remain living are either stuck a dystopian colony, or are living in the United Federation of Britain (which is still plagued with population issues, but is a much nicer place overall).  The Colony is a dark society overrun with crime and illegal activity, which makes for a dynamic setting and presented an intriguing view of the future.  Additionally, Wiseman’s plot is steeped in political conflict, allowing for a believable spy story, but doesn’t slow down the action with heavy-handed concepts.

I already mentioned that Total Recall is packed with action and special effects, but it would be unfair to say that those are the only viable reasons to check this movie out.  For example, the plot is filled with twists that make you unsure even until the end what is really happening.  This isn’t to say that it’s confusing or irritating as plot twists can too often be.  It just keeps you wondering what to believe, which gives it a somewhat philosophical vibe.  After the movie, I couldn’t help but think about the difference between reality and illusion and dissect different things I heard and saw throughout the film.  I’m not trying to claim this is a mind blowing movie in terms of being thought provoking, but it is definitely interesting and has clever moments.

Another plot point to Total Recall is the theme of internal struggle as Quaid tries to figure out who he was, who he is and what is real and what is fake.  Farrell may not be poised for a bunch of Academy Awards in his career, but he pulls off these man versus self  themes with subtlety and, in my opinion, is believable as a butt-kicking secret agent.  There was also the romance theme of the story, which was equally downplayed but revealed chemistry between Farrell and Biel.

If I had to offer one theory on Totall Recall’s disappointing opening weekend numbers, I would say that science fiction is often a hit or miss genre with audiences.  Obviously, movies like Avatar make astronomical amounts of money, but many other gems often go unnoticed.  Who knows why, it may be attributed to too much action, too much dependence on a need to suspend disbelief, or the sense that it’s all been done before.  Still, The Matrix grossed only a little more when it opened back and 1999 and we all know it to be a science fiction landmark today.  So, if you are considering seeing Total Recall, I say give it a shot.  Especially you science fiction lovers out there; don’t let box office numbers dissuade you from seeing this one!

The South Coast has been my home since I came to UMD in 2005. I have worked and lived in NB, and now live in Westport. With a Master's in public relations I have worked as a consultant, and as a professor. I love trying new foods, writing, watching movies (and football!), traveling, listening to a wide array of music, and of course, I <3 the South Coast.
Previous Southcoast Blood Bank Says Thank You
Next Johnson Girls Concerts at Historical Park