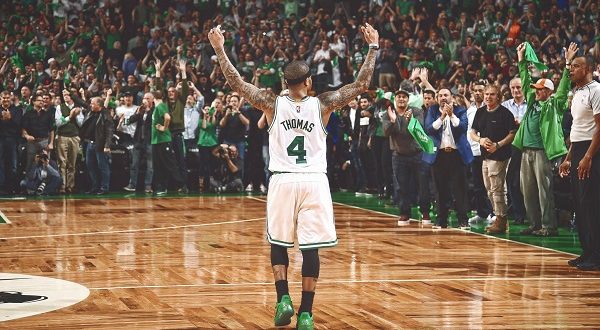 Your ignorance is not representative of the majority of New England sports fans. Your burning of Isaiah Thomas’s #4 Celtics jerseys is nothing more than disrespectful. And if you paid your own hard earned money to then burn the jerseys to the ground, so be it. But know this; your hot blooded expression of “fandom” is tremendously misguided.

Nobody was as shocked to hear about the Kyrie Irving trade to Boston more than Isaiah Thomas himself. This is a man who had no intentions of leaving Boston. In fact, Thomas was poised to lead the Celtics through another season as the team’s best player, while rehabbing an injury that knocked him out of the playoff series against his new team. Isaiah was the focal point of team that won the Eastern Conference, in large part because of Thomas’ record high stat lines throughout the season. And who could ever forget Isaiah Thomas’ tremendous 50+ point playoff game just hours after the tragic news of his sister’s death.

This trade, which included Celtics forward Jae Crowder, center Ante Zizic, and a 2018 Brooklyn Nets lottery pick, brought an NBA finals game winner in Kyrie Irving to our hometown team. While many will argue which team “won the trade”, it is clear that both teams received valuable assets in return.

The Cavaliers received two starters (Thomas and Crowder) and two potential future stars (Zizic and the Brooklyn pick). They also unloaded Kyrie Irving, who had made it clear that his intentions of staying in Cleveland were nonexistent. Mainly because LeBron is rumored to leave for the west coast next season. And so, the Cavaliers can contend this season and still be poised for another rebuild in case LeBron leaves.

The Celtics, meanwhile, received an All Star-finals winning point guard in his physical prime. Irving is only 25, and is under contract for another two seasons. And Kyrie will now get to play with recently acquired all star Gordon Hayward on a Celtics team that surprisingly only has 4 players from last year’s team on their current roster. Even with a new look roster, the Celtics should certainly be contending to make the NBA finals this season, as they have a talented group of role players such as Al Horford, Jaylen Brown, and roomie Jayson Tatum. And this time, they just might have to face Isaiah Thomas and the Cavaliers to do so.

Oddly enough, Kyrie Irving and Isaiah Thomas were the first and last respective picks in the same draft 6 years ago(#1 and #60). Irving has played in Cleveland his whole career, while Thomas has played for several teams since. It was Celtics GM Danny Ainge who a few years ago traded Marcus Thornton and a Cleveland 1st round draft pick to the Phoenix Suns to acquire PG Isaiah Thomas. At the time, IT was only a 6th man coming off of the Suns’ bench. Today, Isaiah Thomas is coming off his best season in the NBA; averaging about 29 points per game, leading the Celtics to the Eastern Conference finals, and being named to his first ever all NBA 2nd team.

This trade came as a genuine shock to all that follow the sport of basketball. The Cavaliers and Celtics are undoubtedly the two best teams in the Eastern Conference. And they just traded two of their best players to each other!

The point is this; both teams made the tough decision of completing this blockbuster trade to not only compete now, but to be better positioned for success in 2-5 years as well. At the end of this upcoming season, the result may as well be determined with a coin flip given how close these two teams skill levels are.

The NBA is a business first and an entertainment entity second. Decisions such as trading fan favorites like IT and Kyrie are not made easily, for various reasons. But these decisions are not avoided in fear of potential fan backlash. Celtics GM Danny Ainge did not fear fans burning jerseys before completing this trade. With ownership groups that are focused on winning championships, these trades are ultimately made because it is agreed within the organization that the trade is the best for sustained success. The goal should be to compete to win in the present and be poised to win down the road. It’s a fine line to walk, but it is one that successful companies tow year in and year out.

And so-to see so many Celtics fan unleash their passion by trying to “erase” the history of IT in Boston by burning their #4 jerseys-is truly saddening. Because through these burnings, there is a deliberate avoidance of the team’s goals and ignorance of the difficulty of the decision itself. The goal for the Celtics remains the same; even though the “how” has changed drastically.

What true Celtics fan would want to forget the heroics of IT last season? Thomas was a sixth man in Phoenix, and came to Boston with nobody expecting anything more from him. Two seasons later he is scoring 54 points in a playoff game just hours after finding out his sister had passed away in a car accident. What true fan would want to forget about IT playing through several injuries throughout the playoffs, and ultimately leading the team in scoring throughout the whole season? What true Celtics fan would turn on a player that most fans loved wholeheartedly, just because they were traded against their own will? If it were up to Thomas, he would have stayed in Boston to strive to win banner #18.

I believe IT will undoubtedly carry a chip on his shoulder for as long as he plays in Cleveland. And when he comes to Boston on opening night, it will certainly be must TV. And while I will be cheering for my home town Boston Celtics, I will still be watching for #4 on Cleveland. Because no matter where he plays, Isaiah Thomas proved to me that his skill and pedigree for the game is ultimately what led him to Cleveland from Boston in the first place. It is what led him from being a “nobody” in Phoenix to an all star in Boston. And I can only hope every burnt jersey is used as fuel for Isaiah to continue to prove his worth on the court. As if he hasn’t proved so much already.

Celtics fans gear up-it’s going to be a feisty season. And here’s to hoping we see IT in the Eastern Conference finals.