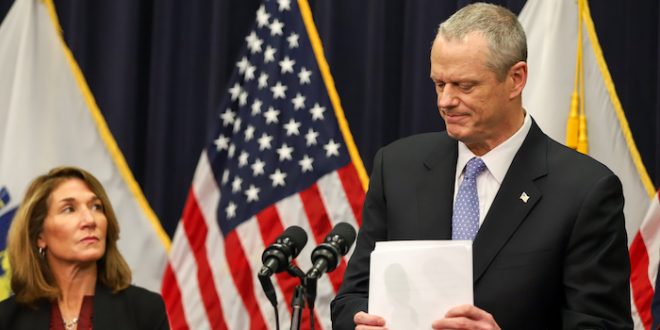 Gov. Charlie Baker announced a wide-ranging series of COVID-19 emergency orders in a Sunday evening State House news conference, including school closures, a ban on most gatherings of 25 people or more, and prohibition of on-premises food or drink consumption in restaurants and bars. [Photo: Sam Doran/SHNS]

Several Republican legislators on Tuesday urged Gov. Charlie Baker to not delay the reopening of the economy any longer, expressing frustration that other states around Massachusetts are allowing businesses to resume activities while owners and employees in their districts remain in limbo.

The lawmakers — three of the more conservative figures in the House — also expressed impatience with the level of detail the Baker administration has provided to businesses so far about which ones will be allowed to open first and when. Business owners should be allowed to figure out for themselves, to some degree, how to safely bring employees back to work, the lawmakers said.

Baker on Monday outlined a “four-phase” strategy for slowly reopening with economy, with certain types of businesses that are “more naturally set up” to limit interpersonal interactions going first. The governor and Lt. Gov. Karyn Polito, however, indicated that more details would be forthcoming in the next couple of days and in the full report on May 18 when the governor’s non-essential business closure order is due to expire.

“My fear is we’re not opening fast enough and we’re not bringing clarity to the rules businesses should use to reopen…Let’s help make Massachusetts great again,” Lombardo said.

Lombardo was one of three Republican House lawmakers to join the Zoom press conference organized by the Massachusetts Fiscal Alliance, a conservative non-profit that has been advocating for businesses to be given more leeway to safely resume operations.

Rep. Alyson Sullivan of Abington and Rep. David DeCoste of Norwell were also on the call, as was Republican State Party Chairman Jim Lyons, though Lyons did not speak.

Many public health experts in Massachusetts and around the country have expressed concerns that states might be moving too quickly to reopen, risking a reversal of the progress they’ve made in slowing the spread of COVID-19. Sullivan, however, said she was worried that any further extensions of the governor’s executive order keeping “non-essential” businesses closed could mean that many small business owners in her district will never be able to reopen.

She also said she’s worried about placing too onerous restrictions on businesses like restaurants.

For instance, Sullivan said if a 25 percent capacity limit were put in place on restaurants, many establishments in her district won’t open because they are too small to turn a profit at that level.

“For those people who want to go back to work, we should allow them. They know what steps they need to take to protect themselves, their families and others,” Sullivan said.

DeCoste said that Baker has provided “superb leadership” during the crisis, but should now take a cue from what’s happening in other states like Vermont, Maine, New Hampshire and Rhode Island where salons and other enterprises have been given explicit instructions on how to reopen with masks and other safety measures in place.

“I would just remind the governor when they do make a decision that we’re not existing in a vacuum,” DeCoste said.

Baker has said that every state, including those bordering Massachusetts, are operating on their own timetable based on what they’re seeing in the numbers of new infections and the rate of spread of the coronavirus. While the trends in Massachusetts have been encouraging in recent days, Massachusetts was hit harder that most of its neighbors and is still coming down from the peak.

“COVID-19 has placed an incredible burden on our economy, created uncertainty and losses for every region of our commonwealth, but together we are developing the framework and phases that the governor described to put us back on track as quickly and as safely as possible,” Polito said on Monday.

DeCoste, however, said residents in his district will simply drive across the border to get a haircut rather than wait for their local barber to be allowed to open.

“I don’t think we’re doing our citizens or the local businesses any favors in delaying beyond what our peers in other states are doing,” DeCoste said.

Rather than “picking winners and losers,” Lombardo said the state should “trust the ingenuity of small business owners to get themselves safely reopened and back to work.”

All three said the business shutdown had been effective in making sure hospitals were not overrun and in reducing the severity of the surge in infection last month. But Sullivan noted that even those measures could not stop more than 5,000 people from dying from the disease.

“It does not have to be either or, either we stay closed or people will die,” Sullivan said. “Shutting down businesses has not prevented those deaths and we can take calculated steps as we allow businesses to reopen to protect those most vulnerable people.”

Paul Craney, a spokesman for the Fiscal Alliance, said the 56-day closure has had a disproportionate impact on blue collar workers who “can’t simply Zoom to a work meeting like we can.”

“Now is the time for State House leaders to be as transparent as possible in laying out the framework for which businesses can open and when. Every job is essential,” Craney said.