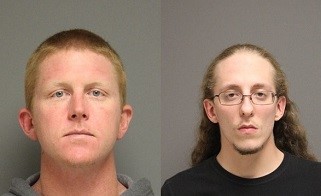 Fairhaven Police Detectives arrested three people Thursday afternoon after observing them engage in drug dealing activity. They initially watched two of the three parties complete a suspected drug transaction at the Huttleston Motel, located on Route 6 in Fairhaven. They then followed the pair in their vehicle to the center of Fairhaven where they watched as they parked and were joined in their car by a third person, who got into the back seat.