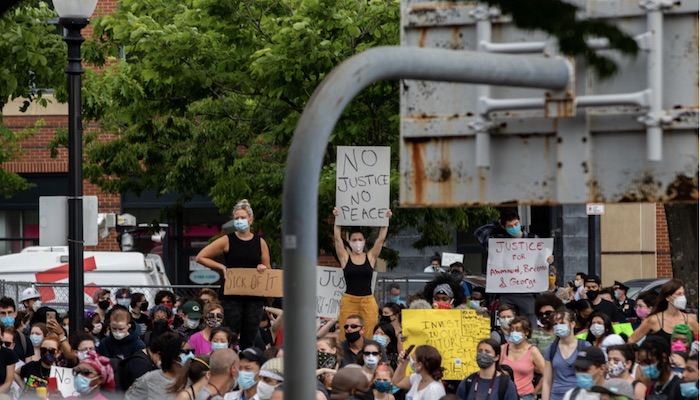 Several hundred people rallied May 29 in the South End in support of George Floyd and to protest police brutality. [Photo: Chris Van Buskirk/SHNS/File]

Thousands of Massachusetts demonstrators urged to get tested this week

There has been a lot of talk about the danger of COVID-19 transmission at the hundreds of large demonstrations, marches, and protests of the last few weeks, but the state has no way of knowing whether or how much the virus has spread at those events. To remedy that, and in hopes of further slowing the spread of the virus, Gov. Charlie Baker on Monday urged anyone who has recently attended a large gathering to get tested this week for exposure to the coronavirus.

Baker announced Monday that free testing will be available at least 52 pop-up testing sites around the state on Wednesday and Thursday, and said people should be tested even if they are feeling fine. Testing site locations are available at www.mass.gov/gettested.

“Obviously there’s been a significant increase in the number of people participating in demonstrations across Massachusetts and around the country. Thousands of people have been congregating in large groups over the past several weeks to exercise their First Amendment rights in the wake of the George Floyd murder. These gatherings are coinciding with reopening, meaning more and more people are moving around with each other,” Baker said. “Anytime large groups of people come together, there’s a risk for transmission. We certainly support people’s rights to rights to express their views peacefully. But we need to keep up our fight to slow the spread of COVID-19 here in Massachusetts.”

Baker said he “would like to see what some of that data shows” because the gatherings have been held outdoors, which from a virus mitigation perspective is a good thing, but have also featured shouting and chanting, behaviors that are thought to contribute to a higher level of transmission.

“Part of the reason we’re making the announcement that we’re making today is we started thinking last week about creating some mechanism to make it possible to get some sense about whether or not there was in fact transmission that came out of the gatherings that have taken place so far,” he said. He added, “While [at] a lot of them, people wore face coverings and they were outdoors and people were moving, there was also a lot of chanting and yelling and those are right up there with singing as one of the things that a lot of the medical community worries about.”

Health and Human Services Secretary Marylou Sudders, who also leads the state’s COVID-19 Command Center, said the state is hoping to test 10,000 people each day at the pop-up testing sites this week, in addition to the roughly 10,000 tests per day the state has averaged in the last week or so.

Though the state has been reporting about 10,000 tests processed a day, Sudders said the capacity exists to process 30,000 tests per day with plans to ramp that up to 45,000 tests per day by the end of next month. That capacity and the ability to put thousands of additional tests into the field knowing they can quickly be processed is a key part of the state’s long-term testing plan.

As of Sunday, 708,383 people have been tested for active COVID-19 infection in Massachusetts, according to the Department of Public Health. There have also been 57,582 people tested for the presence of COVID-19 antibodies, which would suggest a previous infection.

Baker began his Monday press conference by ticking through many of the positive signs from recent days’ public health data, but he reminded everyone that the highly-contagious coronavirus continues to circulate.

“We’re about a week into Phase 2 of the reopening process, outdoor dining hotels and activities like summer camps are coming back. Things may look a little different, but thanks to everyone’s creativity and commitment, we’re reopening and effectively bringing the fight to the virus,” he said. “At the same time, our progress to date is encouraging, but it doesn’t mean the virus has left town.”