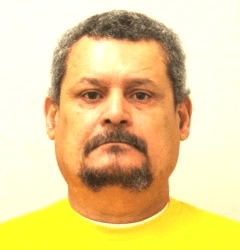 Philadelphia. PEDRO MUNOZ, 57, was arrested after members of the Massachusetts State Police Violent Fugitive Apprehension Section (VFAS) developed information that he was staying at a relative’s home on Helen Street in that city. VFAS troopers contacted the Pennsylvania State Police Fugitive Unit, which responded to the residence and took MUNOZ into custody around noon.

MUNOZ is the third of six wanted offenders added to the list on Friday to be captured. He will eventually be rendited to Massachusetts to be arraigned and be processed as a sex offender.

MUNOZ is wanted for failure to register as a sex offender and failure to provide a sample to a DNA database. He is required to do so as a result of a 1982 conviction in Worcester County for rape of a 13-yar-old child. This is the second time MUNOZ has been arrested after being featured on the State Police Most Wanted Sex Offenders list for evading registration requirements. The first time he was listed, and captured, was in 2008, when he was also found and arrested in Pennsylvania.

Two other new additions to the list were taken into custody in recent days. REGGIE C. ELLENWOOD, 58, was arrested Friday evening in Boston. SCOTT A. HALLE, 45, was arrested Sunday morning in Chelsea. State Police continue to search for three other fugitives added to the list yesterday for failing to register as sex offenders as required by their convictions for various sexual assault crimes.

The State Police are seeking the public’s help in locating these fugitives, so that we can ensure they comply with the sexual offender registration law, which is a public safety measure that allows members of the public to be aware of high risk sex offenders who live or work near them. Anyone who has information about these fugitives or their whereabouts should call the Massachusetts State Police Violent Fugitive Apprehension Section at 1-800-KAPTURE (1-800-527-8873).

Previous Help Wanted: City of New Bedford hiring a Civilian Advocate
Next SEMAP – an organization of passionate individuals dedicated to our physical health and that of the environment and local economy