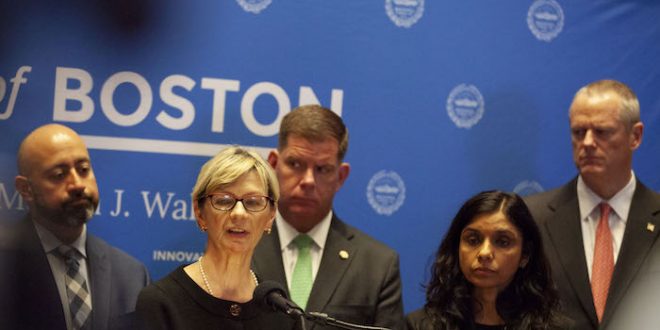 There are now eight confirmed coronavirus cases in Massachusetts

“We are fortunate that Massachusetts is home to world-renowned hospitals and leading health care experts that are planning and preparing our communities and providing us with guidance. The general public in Massachusetts remains at low risk, but we are planning and preparing for the potential for more cases to develop here,” Baker said Friday. “I think we all know that this is stressful for people. But health experts have advised that a virus like this is not deadly for the vast majority of people who may get it.”

Baker said the risk to the general public “remains low,” but state and city leaders said they are preparing for the number of cases to continue to grow in the coming days and weeks.

The four cases in Boston include the one federally-confirmed case involving a UMass Boston student who returned from China in late January and has been in isolation since, and three of the five people who attended last week’s Biogen meeting and have tested positive. There are three cases in Norfolk County, including the other two people who attended the Biogen meeting, and the eighth case is a woman in her 60s who lives in Middlesex County.

Local, state and federal officials are cooperating to make information available to residents and coordinate their responses.

“As you can see, this truly is an all hands on deck approach. We’re working together, there is no space between any of us on this issue because there’s such still such an unknown,” Walsh said, flanked by public health and public safety personnel from the city and state levels.

Marty Martinez, the city’s chief of health and human services, said two women and one man who live in Boston tested positive for the virus. All three patients are in their 40s, he said, and are isolated in their homes. Two have symptoms and one does not, Martinez said, and the city is working with the hotel to ensure it has been appropriately cleaned.

“We currently as we speak today and standing here are tracing who they had been in direct contact with over the last 14 days,” he said.

On Thursday, public health officials in Tennessee announced that a man who tested positive for the coronavirus-caused COVID-19 respiratory illness there had recently traveled to and from Boston. Officials Friday said that man also attended the leadership meeting at Biogen.

Though the three Boston residents and two Norfolk County residents — one in their 40s and one in their 50s — from the Biogen meetings are thought to have become infected with coronavirus while in the city, Martinez said it is important to note that these cases do not meet the criteria for community transmission.

“The source of this transmission is known, and it’s connected to a confirmed case of the virus and close contact with that patient,” he said. “As a reminder, a close contact [is] someone who’s had direct face to face contact within six feet of someone for up to 15 minutes. They’ve had to have an interaction with the presumptive case within 14 days.”

Baker said health experts advise the virus “is not deadly for the vast majority of people who may get it,” but decision-makers are still planning for the chance that cases could increase and for the larger risks it may pose to the elderly or those with weakened immune systems.

Officials emphasized the importance of individual-level caution to help prevent further spread of the illness. They repeated what’s become a common refrain: everyone should wash hands for at least 20 seconds, cough and sneezing into their elbows, and remain home when sick.

“Every person has a responsibility to play a part in containing coronavirus and other germs by following some simple steps you’ve already heard before,” Baker said.

Walsh stressed the importance of good, accurate information to keep residents from panicking during the outbreak.

“It goes back to getting the accurate information out to people and not causing panic,” he said.

Sudders initially said the three cases in Norfolk County were in two people who attended the Biogen meeting and “a male in his 40s who returned from an organized school trip in northern Italy.” She repeated the information at least once later in the press conference.

But on Monday, the Massachusetts Department of Public Health announced that the presumptive positive case in Norfolk County involved a woman in her 20s who recently traveled to Italy with a school group. Asked about the discrepancy during Friday’s press conference, Sudders said she did not have the ages of patients with her and said she would follow up with the News Service.

A Baker spokesman later clarified that the three Norfolk County cases involve two people who attended the Biogen meeting and a woman in her 20s who recently traveled to Italy with a school group.

At another point during the press conference, when Sudders correctly said there were three cases in Norfolk County, the governor leaned towards her and said, “two,” only to have the secretary rebuff him with the correct number.

Baker is expected to leave Massachusetts on Friday for a weeklong vacation with his family in Utah, where he owns a time-share near Park City. Baker’s office said the governor will be briefed daily on the coronavirus situation while in Utah and will remain in contact with federal officials.

State health workers have the capacity to conduct roughly 40 to 50 tests for COVID-19 every day, and officials have asked the CDC for an increased number of test kits.

The Massachusetts state laboratory, which can process results within 24 hours based on volume, is currently the only location for testing. However, Public Health Commissioner Dr. Monica Bharel said federal authorities will allow other labs to perform the tests “shortly” and are working to permit commercially available tests.

“If an individual feels they need to be seen because of possible COVID-19, they should call ahead because then the health care system, whether it’s a clinic or a hospital, can follow the procedures that are well outlined and well known by the health care system in order to prepare for their arrival,” Bharel said.

While the U.S. State Department has recommended canceling international school trips, Massachusetts officials said Friday that they do not have any plans to shutter popular and crowded local events such as the Boston Marathon or the city’s St. Patrick’s Day parade.

Walsh said it is important for venues and event organizers to follow clear protocols on cleaning and offering hand sanitizer, but he cautioned against making “rash judgment decisions.” Unlike other areas that have canceled marathons, he said, Boston is “not there yet.”

“If I’m told by the medical people here that there is a problem having the St. Patrick’s Day parade or there is a problem in other parades, then we will take the appropriate action,” Walsh said. “But until the medical professionals come to us and say ‘we need to shut everything down,’ we’re going to continue just to pass information out to people on what they need to do to take precautions.”

Coronavirus arrived on the American radar with the new year, having emerged first in China in December. By January, it had sickened hundreds and killed more than a dozen people in China as cases began popping up in other countries.

At the end of January, passengers aboard a Cathay Pacific flight from China were screened for possible coronavirus upon arrival at Boston Logan Airport. On Feb. 1, state public health officials announced the first case of coronavirus in Massachusetts: a UMass Boston student in his 20s who had recently traveled to the coronavirus epicenter of Wuhan, China.

That man has been in self-isolation at his off-campus Boston home since late January and continues to recover, officials said this week.

A second case — this one technically a “presumed” positive case not yet confirmed by the U.S. Centers for Disease Control — that involved a woman in her 20s from Norfolk County who recently traveled to Italy with a school group was announced Monday.

On Thursday evening, DPH announced the state’s third positive test, this time in a woman in her 60s who lives in Middlesex County and who recently had traveled to northern Italy. That positive test has also not been confirmed by the CDC.

Both women are recovering at their homes, the state said.

On Thursday, MIT ordered that organizers “must postpone, cancel or ‘virtualize'” all on-campus events expected to draw 150 people or more between now and May 15. House Speaker Robert DeLeo’s office did not respond when asked whether the Massachusetts House, which includes currently includes 157 members, is developing any kind of contingency plan in the event that the coronavirus outbreak becomes more serious.

“Public health experts leading the national response expect the disease to spread in the coming days and weeks. While we cannot predict where or when, you should not be surprised to see the number of positive diagnoses rise significantly,” Congressman Joseph Kennedy III wrote in an update this week.

Beginning Sunday, thousands of researchers who specialize in viruses and the spread of infections will descend on Boston for a conference organized by the International Antiviral Society. The Conference on Retroviruses and Opportunistic Infections at the Hynes Convention Center is planning a special session on Monday at which top public health officials from the United States and China will present the latest information on the origins, spread and status of this latest coronavirus.

Dr. Zunyou Wu, the chief epidemiologist of the Chinese Center for Disease Control and Prevention, is expected to deliver a 15-minute update via video chat from China, and Dr. Anthony Fauci, director of the National Institute of Allergy and Infectious Diseases at the U.S. National Institutes of Health, will give a recorded update on the coronavirus outbreak. CDC epidemiologist Dr. John Brooks will also make a presentation.