The Story Behind The Pour Farm Tavern

Stop me if you’ve heard this one:

This guy walks in a bar….. Craig Ribeiro grew up in the South End of New Bedford where his Grandfather had a butcher shop with a candy counter. When Craig and his crew would take some candy from the store, Avo would good-naturedly shout: “You kids are gonna put me in the Poor Farm!” When he was older he played baseball for Local 59 at the Pony League field on Brock Avenue directly across the street from the old Poor Farm site (The Poor Farm was a Federally mandated program from the 1860‘s that provided shelter and work for the less-fortunate resembling a modern-day homeless shelter). That “Poor Farm” phrase stuck with him in the back of his mind for years. 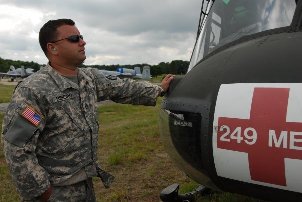 This guy walks into a bar …sixteen years in the Army National Guard as a Flight Medic and a one-year tour of active duty left Craig with a little pile of money. He aspired to own and operate a tavern that featured craft beer and he wanted it to be in Downtown New Bedford. After obtaining a liquor license, his first attempt went south, through no fault of his own. So, there he was walking around downtown one day: a guy with a liquor license and a dream that was on hold. Remember when Purchase Street was mostly empty storefronts? The one on the edge of Wing’s Court intrigued him, a long narrow building that was once a bar. He got the key from Elaine at The Black Whale and stepped inside. It was just a shell of a space–some of the woodwork was finished, but it was just a dusty, empty room. The building had been unused for years. But this guy had a vision, and in his mind’s eye he could see a beautiful craft beer tavern with 24 taps, a long bar, stools, tables, a kitchen serving fine food and, most importantly, customers.

This guy walks into a bar …so all the pieces started coming together for Craig: the licensing board approved the transfer, construction got under way, neighboring business offered advice and assistance (especially Craig Paiva and the crew at No Problemo), staff was hired, relationships with breweries were established (most notably with Harry Smith at Buzzards Bay Brewing), and UMass and BCC opened branches downtown (Craig lists this event as the most crucial piece of the puzzle–the influx of a legion of young people into the downtown New Bedford economy). Finally, the doors of The Pour Farm Tavern opened about two years ago and slowly but surely it became a well-established tavern with 24 craft-beers available on tap. It’s an elegant space, long and narrow with a beautiful bar on the left with a window onto Wing’s Court. The atmosphere is friendly and the staff is very good at helping you choose from the vast array of beers available. Recently the kitchen opened and the food is great, served up by Chef Nate Aguiar. 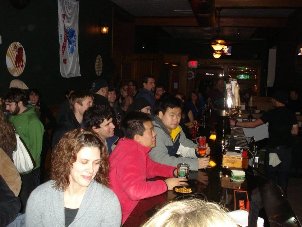 This guy walks into a bar …this time it’s me and I’m walking into The Pour Farm Tavern (PFT) for the first time to meet Craig. I had just seen a poster advertising that Iron Mustache would be performing at PFT in a few days, and I am always on the hunt for a gig. I remember thinking that this guy was a true New Bedford-ite, down to earth and with a reserved sense of humor. In the end, he hired my band. A few months later, when I formed the MRL Trio, he was enthusiastically on board and I must say that our dates at PFT were very instrumental in the success of our group. The entertainment offered at PFT is eclectic and ever-changing. Talents like J. Kelley, Neal McCarthy, Pumpkin Head Ted, Chris Evil, Marcus Monteiro, The Jethros, Wood For Fire and many more grace the stage at various times and there is an open Jam of Sundays hosted by Matt Antunes. The music schedule is available at pourfarm.com

This guy walks into a bar …as I stated before, Craig is a Flight Medic in the Army National Guard. He is scheduled for another active tour of duty overseas early in 2011. He feels like he’s leaving a child behind–his beloved PFT, but he realizes his staff has been very instrumental in the success: “I built the foundation and they’re building the house” and he is leaving his baby in very capable hands. Andrew Kepinsky will be taking over in his absence and Craig wanted to give special shout-outs to Amy Desrosiers and Craig Paiva at No Problemo. (My favorite bartenders? Robin DeSloover and Donna Bourassa who work the bar every other Wednesday when my band plays there).

This guy walks into bar …it’s Wednesday at 5PM and he has a Volvo Wagon full of musical gear parked out front. In a few minutes he’ll be lugging it all inside to set up the stage, but first maybe just a pint of JustBeer IPA?