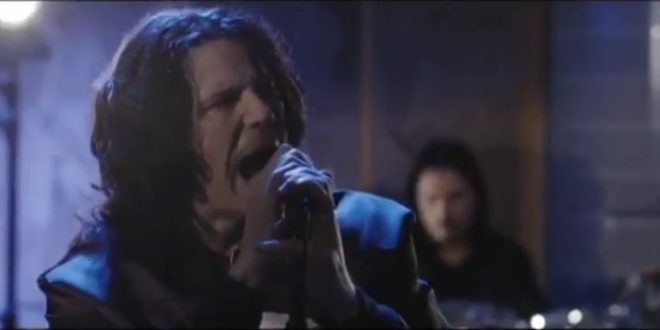 For over three decades, The Cult has transcended across musical genres and retained thousands of devout fans as they kick off a world tour in support of their tenth studio album this month, Hidden City.

Change is expected over the years, but what remains constant is the core duo that continues to lead the band: lead singer Ian Astbury and guitarist Billy Duffy.

In support of their new album, The Cult is performing at the Zeiterion Performing Arts Center Tuesday, May 9th. In a recent conversation with Astbury, he shared his thoughts about countless years on the road, his new album and even Sony Walkmen.

Today, The Cult’s tours aren’t about promoting their albums or increasing exposure as much as it’s about “sharing an intimate moment with people.”

“The idea of promoting anything has gone by the wayside,” Astbury said. “We sing for our supper. This is our livelihood.”

This will mark the first time the band plays at The Z, but Astbury said every venue is different wherever they go and it takes a few moments to fully grasp the look and sound of the place.

The Cult has performed at every type of venue imaginable over the band’s decades of creating music, but Astbury said it’s more about the connection with the audience than anything else while on stage.

“I love playing seated venues and watching people get out of their seats,” he said.

It’s hard to imagine any part of the world Astbury hasn’t seen over the course of his life.

“I’ve been traveling since birth essentially,” Astbury said as he recounted first moving to Scotland with his mother before the age of one and traveling back and forth from Scotland, England and Canada during his childhood.

Even now, Astbury continues to travel across the world, often visiting areas of indigenous tribes. This worldview is often incorporated into the lyrics of The Cult’s songs. Hidden City and the two previous albums (Born into This and Choice of Weapon) create a trilogy that examines contemporary world issues and compels the listener to look within themselves for reactions.

“We’re responding to what we’re seeing and experiencing,” Astbury said. “There’s lot of anxiety out there. A lot of people asking, ‘What’s next?’”

The trilogy touches on topics of dystopia, economic struggles, social media and climate change among other things.

As with the themes found in the band’s recent work, this conversation with Astbury focused on the need for people to just be human again. As we spoke of current global issues, he said the current method of violence and protest are not the proper methods of solving the world’s problems.

“Change will come with communication,” he said.

He went on to talk about debate and how it’s a healthy way of understanding somebody else’s perspective. He and his friends constantly debate about music and art and said they can get as heated as a debate over politics or sport teams. He believes the lack of face-to-face interaction today prevents the subtleties of traditional conversation and people are talking to each other rather than with each other.

Before the show, Astbury plans to take a stroll around the Whaling City (as he does in most cities the band plays) and seek out a place to pick up a new book or even some vinyl to add to his massive collection back home.

A brief chat on vinyl took a surprising sharp turn onto cassettes. Astbury said he welcomed the revival of the cassette tape and still has an original Sony Walkman. He said Walkmen were the ultimate way to experience music and life together. Some of his greatest memories were walking through the streets of London and stopping to chat with other folks also listening to their Walkman. A conversation could break out about what each other was listening to and they could even swap tapes to experience new music.

Once again, Astbury is able respond to a question with an answer touching on the importance of human interaction and self-awareness.