On November 16, 2010, Mark Zuckerberg was named Time Magazine’s “Person of the Year.”  This honor was bestowed on this twenty-something from Harvard for his invention of Facebook, the social network that has connected more than half a billion people while mapping the social relations among them.   He created a new system of exchanging information and changed how we live our lives. Facebook is growing at a rate of 700,000 people per day. Currently, one out of every twelve people on the planet has a Facebook account.  If Facebook were a country, it would be the third largest behind India and China.

This got me thinking about the power of Facebook and the changes it has brought about for me and my friends.  About a year ago, I “friended” a few of my ex-high school classmates on Facebook.  This eventually led to all of us meeting for cocktails on a cold, snowy night in January.  The eight of us had a great time and so we decided to encourage others to join us in July for a summer New England clam boil. 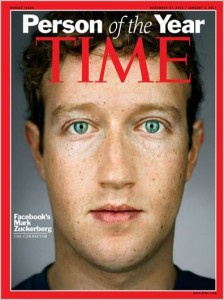 Through the power of Facebook, about 50 friends gathered for a wonderful reunion.  This meeting had a different feel to it than your typical reunion.   Since we had been sharing our lives, our triumphs, sorrows, pictures of our children, and whatever else interested us on Facebook, by the time we reunited we were up to speed on one another.   Although decades had passed since many of us had seen each other, the conversations flowed as if no time had passed.  New classmates continue to join and this summer we are planning an even bigger reunion!

After college I lived in California for many years, so I also enjoy using Facebook to reconnect with friends from that time of my life.  We were single and carefree then, and now many are married with kids and even grandkids.  Although there are 3,000 miles between us, it is great to be in touch with these people who I probably would have lost touch with had it not been for Facebook.

Earlier today I met for coffee with two girlfriends who I hadn’t seen in decades.  Nancy, who now lives in Nova Scotia, was in town for a few days and, thanks to Facebook, we got to reconnect.  We had a great time reminiscing about our time as roommates in Newport and Martha’s Vineyard many years ago.  Margie, who was friends with us both, joined us as well.  Although many years had passed, as we were chatting away, I couldn’t help thinking that we were back to being three teenage girls, gossiping about our friends.  As we parted, we promised to stay connected through Facebook, and I know we will.

Another great aspect of Facebook is that, as a music lover, I’ve been able to follow my favorite bands.  In fact, I understand that McCarthy & Legge, one of my favorite local bands, met on Facebook through mutual friends.  They even collaborated on songwriting together before they ever met in person!  A year later, they have released their 2nd CD and play in local venues to a huge following, many of whom are Facebook friends.  It is possible that this beautiful music may not exist at all had it not been for Facebook.

Zuckerberg’s bio page states: “I’m trying to make the world a more open place.”  Mission accomplished, Mark!  But I also think that it makes this big world seem like a smaller place, a place where we can reach out and touch our friends, wherever they are,  with the click of a mouse.   When I think of the friendships rekindled and the new one’s made, the music composed that may never have been, the sharing of our lives, the small moments and the big celebrations alike, I amvery thankful for Facebook!

So thank you, Mr. Zuckerberg, on behalf of myself and 500 million other people whose lives have been touched and changed by Facebook.  Also, thank you for the 100 million dollars you donated to the Newark School system…it will surely touch and change many lives.  I think you’ve earned the right to be called, “Person of the Year!”