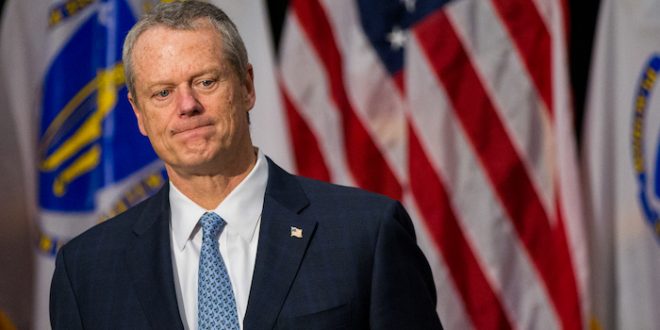 Boston, MA - 5/11/20 - Gov. Charlie Baker gives a press conference on May 11 in the Gardner Auditorium of the State House over Massachusetts approach to re-opening the economy. (Blake Nissen/ For The Boston Globe)

The following was released by the Massachusetts Public Health Association:

Today, Governor Baker received all D’s and F’s on a report card rating his reopening policies based on how they prioritize the health of Black and Latinx residents, low wage workers, and others that have been most impacted by COVID-19.

The Task Force on Coronavirus & Equity, a coalition of 94 public health, community, and labor organizations that began meeting in mid-March, released today’s report card to monitor progress on four key criteria that they announced on June 4th.

The report card comes as Massachusetts enters Step 2 of Phase II of reopening, bringing far greater numbers of workers and consumers into contact at indoor dining, offices, and services that require close personal contact. The latest move in Massachusetts comes as at 23 state are experiencing an increase in COVID-19 cases.

“We are eager for a safe reopening for the sake of workers, small businesses, and our overall economy, but Governor Baker’s reopening policies to date have shown a disregard for the health of Black and Latinx residents, low-wage workers, and others who have been hardest hit by COVID-19,” said Carlene Pavlos, Executive Director of the Massachusetts Public Health Association, which coordinates the Task Force. “It’s not too late to change this. We call on the Governor to immediately implement commonsense policies that value the lives of the communities that have borne the brunt of the pandemic.”

“The fact that the positive case rate for Black and Latinx residents of Massachusetts is three times higher than that of white residents is further evidence that COVID-19 is an environmental justice issue and should be treated as such by Governor Baker and the Department of Public Health. Black residents and other communities of color are doubly impacted by the public health and economic impacts of the pandemic. As the state continues to reopen, Black residents and communities of color will continue to suffer at disproportionate rates unless the Governor implements policies that protect their lives and livelihoods,” said Sofia Owen, Staff Attorney at Alternatives for Community & Environment (ACE).

“Workplace exposure to the virus that causes COVID-19 has already sickened and even killed hundreds of frontline workers in our state. It is clearly a key way that the virus is being spread to families and communities. Workers are not expendable commodities in the rush to reopen our economy. They must be protected and yet the state has invested very little in ensuring that critical health and safety standards are enforced,” said Jodi Sugerman-Brozan, Executive Director of the Massachusetts Coalition for Occupational Safety and Health (MassCOSH). “First OSHA failed to protect workers, then the state passed the buck to local boards of health without any resources, training or even input in the standards or process, once again leaving workers to fend for themselves in seeking the protections they deserve.”

Last Friday afternoon, an advisory group to DPH issued a series of recommendations addressing health equity in our pandemic response. “Last week – more than 3 months into the state of emergency – we saw several helpful recommendations on health equity from an advisory group of respected leaders convened by DPH,” said Pavlos, “but we were surprised and disappointed that, while making those recommendations public, the Governor made no commitment to implement any of these important measures. The time for talk is over; action is desperately needed now. We sincerely hope that in the coming weeks we are able to issue a more favorable report card based on the Governor’s actions.”

The Governor received the following grades from the Task Force:

Infections Dropping for All Groups: D
While overall state infections, hospitalizations, and deaths continue to fall, it is impossible to know whether overall statewide data mask inequities and it will be impossible to understand who is being most impacted in the case of a future surge. While state data on race and ethnicity has improved – clearly showing a disproportionate impact on Black and Latinx residents – nearly 35% of cases are still missing data on race and ethnicity. The state is not tracking any data on low wage workers, people with disabilities, people who don’t speak English, and others who have likely been hard hit by the pandemic. Governor Baker has not prioritized the collection of data that would allow inequities to be clearly understood. The Governor signed a bill to improve state data collection and reporting 15 days ago, and we are awaiting information on when and how it will be implemented.

Enforceable Protections for Workers + Support for Small Businesses: F
The Baker Administration has issued requirements for workplaces across a variety of sectors that have reopened. However, the Governor has done nothing to address the extremely limited capacity that currently exists to ensure safety standards are being met. The entities with enforcement authority – local boards of health and the Department of Labor Standards – do not have anywhere near the staff or resources to respond to or enforce workplace safety protections on the scale necessary. Further, current guidelines do not allow for timely enforcement action in the case that employers are putting workers and the public at risk. Instead of enforceable protections, employers are only required to provide a self-attestation that they are compliant with safety standards, ignoring core tenants of occupational health practice and denying a role for workers in safety assessments.

Accelerate & Expand Testing: D
The Governor is falling dramatically short of meeting his own goal to perform 45,000 tests/day by the end of July. In May and June, Massachusetts averaged less than 10,000 tests/day. Testing is not widely available for high risk people who do not have symptoms (including essential workers, people living in congregate facilities, and residents of the communities most impacted) despite this being a stated goal of the Administration. A new state testing website does not recommend testing for high risk, asymptomatic people. While pop up sites recently offered testing aimed at people who had attended protests, these sites were open for just two days before closing. A plan has been developed that would expand testing to meet these goals, but has not been implemented.

Seat at the Table: F
The Governor has not consulted with or engaged the groups most impacted by reopening decisions and has ignored calls to name a Recovery Advisory Board to advise him on decisions about future phases of reopening (and, if needed, reclosing), including guidance for standards and enforcement. Essential workers, Black and Latinx communities, people with disabilities, LGBTQ+ people, and older adults will be most affected by these decisions but have no seat at the table. Likewise, municipal public health leaders who are responsible for education, communications, and enforcement at the local level, have not been consulted on important decisions. While useful, the DPH health equity advisory committee was not convened for this purpose.