Home / Latest / Stop & Shop employees have my support … for now 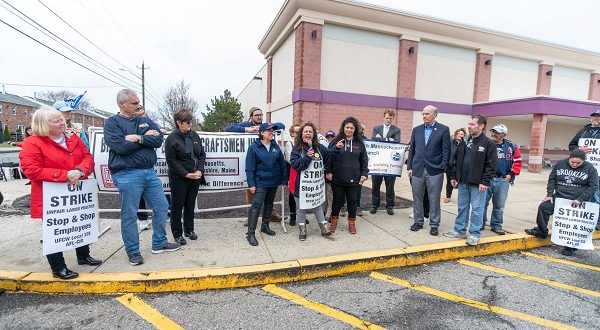 Stop & Shop employees have my support … for now

Since the start of the Stop & Shop strike, I have not gone grocery shopping at any of the Stop & Shop locations. It was my grocery store of choice before the strike, but I always give the workers of any strike the benefit of the doubt until they prove me wrong.

While the majority of striking workers seem to be behaving, there are some that have resorted to shaming anyone who crosses their picket line – shouting and in some cases taking video/photos to shame them. The highest profile video so far is Boston Bruins great Ray Bourque:

Being a union hockey player for 22 years I respect Unions and the work that they do. I have a medical condition that I was preparing for this morning and mistakenly crossed the picket line at Stop & Shop. On my way out I apologized immediately.

Being a union hockey player for 22 years I respect Unions and the work that they do. I have a medical condition that I was preparing for this morning and mistakenly crossed the picket line at Stop & Shop. On my way out I apologized immediately.

If you watch the video, Ray was carrying a single bag. Was he picking up a prescription or just over the counter medication? It’s fair to assume Ray could have went somewhere else, but I doubt his purchase of a few items is going to keep Stop & Shop open.

If you drive by a Stop & Shop at their peak hours, the parking lots are mostly empty except for the striking workers. I’d say the impact is significant on Stop & Shop’s bottom line. I’d estimate more than 99% of people have stopped going to Stop & Shop. Do the workers really need to harrass the less than 1% that still go there?

In no way, will that revenue keep Stop & Shop from the bargining table. Do workers really need to shame and destroy a small business owner because he picked up a prescription? Went to his bank to deposit money? You do not know why they are going into the store. While it may be easy for millionaires like Ray Bourque to switch a prescription, it may not be as easy for others.

Your fight for benefits is important, but not so important as to call for others to harrass and boycott – trying to hurt or put a small business out of business. Getting people laid off in the name of supporting workers makes zero sense. If striking workers continue to harass people, I will head back to Stop & Shop and use the self-check out line. It will be my protest. I’m supporting you and will continue to support you in your time of need, but that support has limits. Continue to fight for your benefits, but don’t harass the folks who stop by. Explain to them why you are striking and you’ll likely win them over. Continue to harass them and you’ll lose their support – and mine.