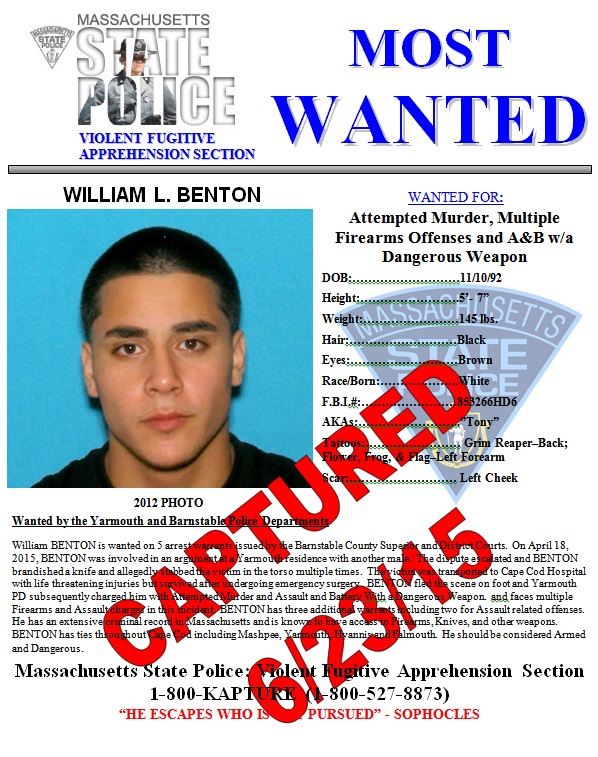 The State Police Violent Fugitive Apprehension Section and the United States Marshals Service recently developed information that WILLIAM BENTON, 22 — one of the MSP’s Top Ten Most Wanted Fugitives — was staying at an address on Seminole Boulevard in Tarpon Springs, Fla. At approximately 9:30 a.m. today members of a US Marshals task force based out of Tampa located and arrested BENTON without incident. BENTON was taken to the Pinellas County Jail, charged as a Fugitive From Justice and held pending rendition back to Massachusetts.

BENTON’s capture follows a lengthy investigation and search by State Police, US Marshals, and Yarmouth Police. He is the subject of multiple warrants out of Barnstable County in Massachusetts charging him with several counts of assault with a dangerous weapon and additional counts of aggravated assault, intimidation of witness, threats to commit a crime, and various firearm and motor vehicle offenses.

The warrants charge BENTON in two separate violent incidents. On May 10, 2014, BENTON was involved in an argument with a man at Keyes Memorial Beach in Hyannis. The man was accompanied by his child at the time. During the argument, evidence suggests BENTON pulled out a gun and shot at the man, missing him and the child. Barnstable Police arrested BENTON a short time later; during the case against him, while he was out on bail, BENTON did not appear for a scheduled court date. Additionally, evidence suggests BENTON stabbed a man four times on the evening of April 18 in Yarmouth. The victim survived but BENTON was not captured at the time.