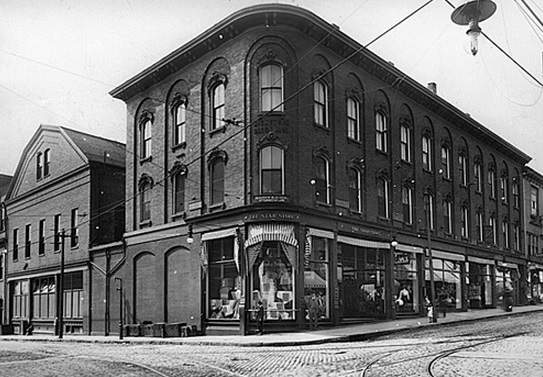 Fourth Street; Thomas Knowles & Company
Once upon a time, before Purchase Street was named so, it was called 4th Street. It was primarily residential, had a rather large park with gardens and was lined with elm trees. As more and more revenue from Whaling entered the city, business “sprawl” spread north. The first three streets were primarily service streets – businesses that served whaling, i.e. coopers, carpenters, wrights, smithies, customs, the Seamen’s Bethel, Mariner’s home, brothels, etc. The first available street for residents to go shopping or be entertained at was Fourth Street and Purchase Street – East of Union Street- was born circa 1834.

One of the very first dry goods stores on Purchase Street to open was artist William Bradford’s at 16 Purchase Street in 1845. Another merchant, who saw the great potential of Purchase Street was one Thomas Knowles (1803-1877). He and his brother, John Pepper formed a partnership in 1835, T.& J.P. Knowles producing clothing.

Their cousin Joseph Knowles entered the picture and they opened a store on the Northwest Corner of Union and Purchase Street called Thomas Knowles & Company in 1844 – likely the very first establishment to sell dry goods on the street. In addition to dry goods, they sold groceries, provisions and were also agents for over a dozen whaling vessels.

The buildings of note by the 1860s were Liberty Hall, the granite North Congregational Church, the Cummings Building and the Wing’s Building – which was the precursor to Wing’s Department Store and Wing’s Court. More and more businesses popped up on Purchase Street and it became the premier shopping destination.

New Bedford Dry Goods Company
Back to Thomas Knowles & Company – they operated their store with their sons until 1894. Here there is a lacuna in the timeline of the building’s history. When it appears next, it’s New Bedford Dry Goods headed by president Asa A. Mills, which opened to wholesalers on October 8, 1898 with a sales force of 20 people. This store claims to be the site of the very first escalator in the country – in spite of the fact that the Guinness Book of World Records lists Coney Island as having the first.

The one-story building and its basement consisted of a modest 15,000 sq. ft., but its popularity by 1915 meant a ten-fold expansion: they increased their workforce to 300 and took over adjacent buildings to the tune of 150,000 sq. ft. By 1918 it opened to the public, needed an elevator because it expanded upward, and even added a roof garden. New Bedford Dry Goods aka the Star Store became the shopping destination.

It had a deli, clothing department, jewelry, cosmetics, pet center, and more. In 1952, Star Store jumped on the bandwagon of “merchant cards”, the precursor to credit cards with a metal card called a “credit plate.” Sometime in the 1960s they built a carillon, which was an automatic music “machine” that consisted of bells that were struck electronically. Star Store’s carillon was a favorite around Christmas time when it belted out Carols and popular Christmas tunes.

A “first” claim for Star Store was that it was the first store in the country to utilize pneumatic tubes which used small containers to send bills and receipts. While it was surely used for practical reasons, it had a real promotional value in drawing in local children.

When Joe isn't writing, he's coaching people to punch each other in the face. He enjoys ancient cultures, dead and living languages, cooking, benching 999#s, and saving the elderly, babies and puppies from burning buildings. While he enjoys long walks on the beach, he will not be your alarm clock, because he's no ding-a-ling.
Previous Who Remembers…Barbero’s Pizza?
Next New Bedford Area Chamber’s 2014 Greater New Bedford Home Show is coming!