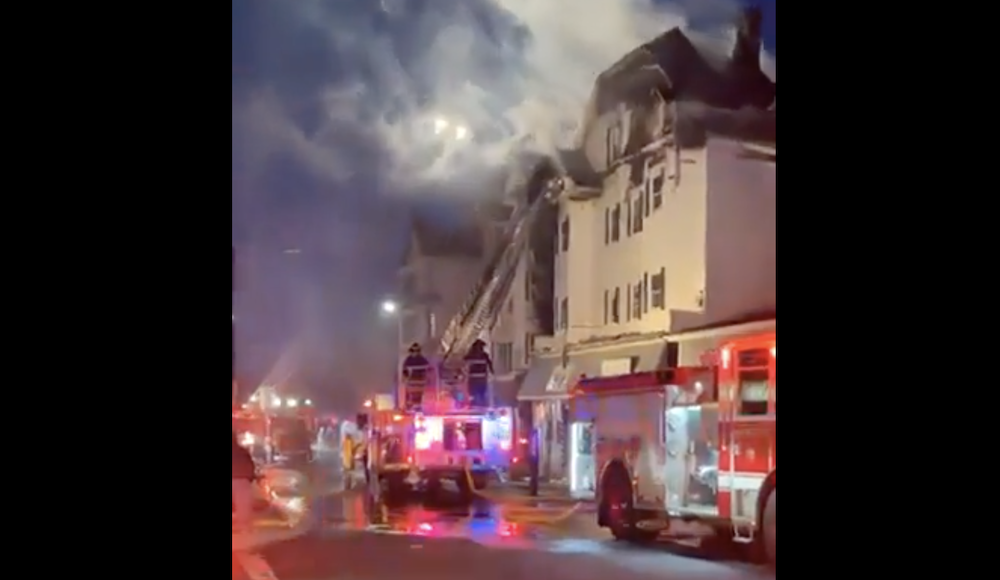 The fire started in the alleyway between 1279 and 1283 Acushnet Avenue. Smoking materials dropped from an upper floor ignited trash and debris next to a dumpster.

Residents of Sprinklered Building Escaped
The fire department was notified of a fire at 1283 Acushnet Avenue by the fire alarm monitoring company at 00:15. The multi-unit apartment building was also equipped with fire sprinklers that enabled everyone to escape safely. The two victims were found in 1279 Acushnet Avenue, a 4-story building with commercial space on the first floor and two apartments on the second, third and fourth floors. The building had no sprinklers and no central alarm system. Many of the smoke alarms appeared disabled and were clearly more than ten years old. Residents stored items in the rear stairwell blocking it as a means of escape.

Chief Kruger said, “This fire is a terrible tragedy and on behalf of the City of New Bedford and our firefighters, I offer my deepest condolences to the families. This fire clearly demonstrates that fire sprinklers buy time and time buys life. The deaths occurred in the non-sprinklered building and everyone in the sprinklered building were able to escape safely.”

State Fire Marshal Ostroskey said, “In Massachusetts, smoke alarms must be replaced after ten years. The sensing mechanism degrades over time and cannot be relied upon to work when you need it most.”

Kruger added, “In addition to being expired, many of the smoke alarms in 1279 appeared to have been disabled. In a fire, you may have less than 3 minutes to escape and smoke alarms provide early warning of danger.”

Smoking Fire Safety Campaign
Ostroskey said, “My office is currently running public service announcements on television and radio that specifically address the improper disposal of smoking materials. They are available in English and Spanish, along with other smoking fire safety materials at www.mass.gov/smokingfiresafety.”

Kruger said, “This fire shows why it is so important to put it out, all the way every time. Recuerdo, apágalo totalemente, cada vez.”

Joint Fire Investigation
The fire was jointly investigated by members of the New Bedford Fire Department, New Bedford Police detectives, and State Police assigned to both the Office of the Bristol District Attorney and the Office of the State Fire Marshal. Assistance was received from the Department of Fire Services Code Compliance Unit and additional State Police Units.