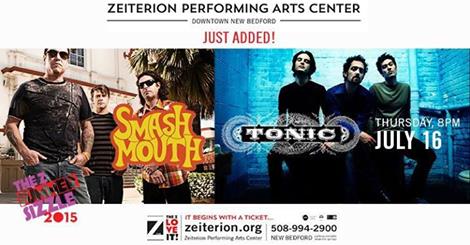 Smash Mouth is bringing the party to The Zeiterion July 16

Smash Mouth brings the party. Since the 1990’s these California rockers have won audiences with an invigorating concoction of genres that includes ska, punk, grunge, rock and pop – never staying in one genre for very long. The bottom line is to give an audience a thrill. “Our set is very high energy,” says bass player Paul DeLisle. “It’s excitement from start to finish. We’ve always thought of ourselves as a fun in the sun California-in-a-can kind of party band.” And the party will be coming to the Zeiterion Theatre in New Bedford on July 16, in a show that teams them with another 90’s act, Tonic. The show begins at 8 p.m. and tickets are $39, $49, and $59. Both Smash Mouth and Tonic are celebrating their 20th anniversaries as performers.

“I only knew the band from what I had heard on the radio, and I was pleasantly surprised. Smash Mouth blended good old fashioned fun with good old fashioned rock and roll with the pop grunge aesthetic that defined the 90s sound with a bit of reggae and funk. It was a fun live show. There were a variety of ages in the crowd but no one seemed disappointed.”

“Our diversity of sounds translates into keeping an audience interested. Fortunately all the musicians onstage are super talented and masters at their instruments. We like to feature all of our players and give them a chance to shine throughout the set. For example we’re one of the few bands that likes to do drum solos because our drummer is that good. We’re looking forward to releasing a live album this summer on Sony Entertainment. Smash Mouth is based in the northern California city of San Jose, near San Francisco and Berkeley, something that singer Steve Harwell points to as an influence. “We’re a contemporary band with retro influences,” Harwell says. “The hippie culture has had an effect, but we all bring our own influences to the table when we’re crafting a new song. “Regardless of our influences we always like to deliver a high energy set.”

In 2011, Steve Hoffman’s Music Forum gave this review of a Smash Mouth concert:

“The band was having lots of fun. Singer Steve Harwell loves to play around on stage – going over to the two guitar players, hugging them, giving them noogies, kisses, playful shoves, high fives, toweling off their faces, draping the towels on their heads, just in general messing around with them, having a blast – physical, playful roughhousing. You could tell he loves the crowd.” The band’s most recognizable songs include tunes such as “All Star,” “Walking On the Sun,” “Then the Morning Comes,” and “Can’t Get Enough Of You Baby.” If you’re in your 40’s or 50’s you likely recall the classic lyric “Hey now, you’re a rock star, get the show on, get paid,” from “All Star,” a song that made it to number four on the Billboard charts. Over the years the band has covered a collection of songs such as The Monkees’ “I’m A Believer,” War’s “Why Can’t We Be Friends,” Steely Dan’s “Do It,” and the Beatles’ “Getting Better.”

The band got its start in 1994 when Harwell fused his rapping talents with the punk rockers DeLisle and guitarist Greg Camp. When the band‘s lineup was completed they were writing songs in the vein of ska punk. Their song, “Nervous in the Alley” was played by a San Jose radio station, and soon the band was signed to Interscope Rrecords, which released “Fush Yu Mang” in 1997. The album would sell two million copies, thanks in part by the single, “Walking On The Sun.” and “Why Can’t We Be Friends.” Two years late the band took a more pop approach with “Astro Lounge” which would sell three million copies, including “All Star,” which appeared in several movie soundtracks.

And Tonic also knows what it’s like to have hit songs. The Lost Angeles based band is most known for the songs “If You Could Only See” which not only reached number 11 on the Billboard Charts, but was also recognized as the Most Played Rock Song of 1997. The band’s penchant for performing has earned them the moniker of “relentlessly gigging.” while their music has earned them two Grammy nominations.

In 2010 they released their fourth album, their first in eight years – a self-titled album with 13 tracks. Critic Mark Demming claimed that “Tonic” didn’t sound like a band trying to recreate their past success, but confidently embracing their signature sound, doing what they do with a sure hand and genuine inspiration.

Previous Nominations Sought for the 20th Annual Veteran of the Year Award
Next The South Coast Hot Jobs List – 25 June, 2015