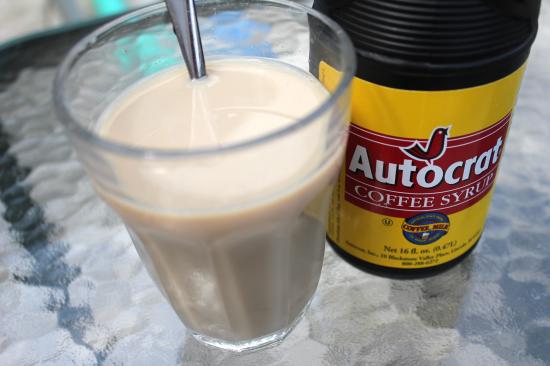 When was the last time you had coffee syrup?! (thebestthingeverandthensome.com)

Throughout the country – or the world for that matter – there are regional delicacies that can rarely, if at all, be found elsewhere. They make our little corner of the world special or unique. Something we call our own. The Midwest has Lutefisk. The Pacific Northwest has the Geoduck. Illinois has the Horseshoe Sandwich. New York City has Bialys. And on and on and on.

We have quite a number of our own regional delicacies and it just depends on how you want to cut up the region. Are we New England? The South Coast? Greater New Bedford? You could even chop up neighborhoods and find some differences. Cacoila, linguica, chourico, stuffed quahogs are just a few. But let’s talk about a debated and beloved one: coffee syrup.

Coffee syrup is one of those regional specialties that we have in the South Coast that the rest of the country has either never heard of or has have heard of, but never tried. These people are deprived…nay, dare I say depraved!

If you have never had coffee syrup in your life, you have been brought up wrong. Abused. Neglected. Call your parents now and tell them that you need to talk or you’ll notify the Department of Social Services. It won’t matter that you are now middle-aged. They will sympathize and support you once you mutter the words “I’ve never had coffee syrup.”

The first time I realized the concept of regional delicacies was on a trip to Florida when I was about 10 years old. We stopped at a local diner for lunch and like always I requested coffee syrup with my grilled cheese. After a pause and a puzzled look, the waitress managed a “What do you mean? You want a coffee with milk in it?” How do you explain a concept that is as normal and natural as tying your shoes? How do you convey what is an iconic drink of extraordinary magnitude? Doesn’t everyone have coffee syrup…every day? My ten year old mind was blown.

Poor deprived waitress. Hopefully, she turned her life around.

Strangely enough, outside of New England there is one other place on the planet where coffee syrup is a regional delicacy: Australia. Go figure.

So when did this nectar of the gods get created? When did this item that all our friends and family members who have moved away, ask us to send them in the mail? (Just last month I sent a package to Arizona.) Who is responsible for spreading such joy across New England? Well, that is up for debate. The answer depends on where you are from. Rhode Islanders and Massachusett..ians..ers… both lay claim. In fact, it was made the state drink of Rhode Island in 1993.

The Italians and Portuguese both say they came up with the idea. Since the Italians aren’t a large community in the South Coast, their voice has been obscured by the louder Portuguese “voice”. The Italians claim that they have been making it since 1895 in Providence and there may be some credibility to this claim: a version of coffee milk was a favorite of kids across Italy since the 19th century. This early concoction was a very thrifty and frugal way of not wasting the coffee grounds that the adults were drinking. While you couldn’t make more strong coffee from used grounds, you could make a treat by straining water and sugar thought the used coffee grounds.

The only problem with this claim is it is based solely in anecdotes and there are no historical records of it being manufactured. While there is no reason to disbelieve the anecdotes – they are likely true – the first historical record of it being produced and sold is right here in New Bedford is when the Silmo Packing Company opened its plant in 1932. The building and perhaps the company was there since 1920. Located at 1339 Cove Street – where the Inner Bay restaurant is today – the company was started by Portuguese-Americans Louis Silva and Carlos Desouza Morais. You more clever readers, just found out how Silmo got its name.

After Silmo opened its doors and started shipping it coffee syrup all over the South Coast and beyond. They cornered the market until 1938 when Italian-American, Alphonse Fiore’s company Eclipse Food Products of Warwick added it to their list of product offerings and began to mass produce it. The more popularly known Autocrat wouldn’t start selling it until the 1940s, in spite of the fact that had been around since 1895.

Silmo had tried to compete with the other companies and even underwent a name change, becoming MilkMate – which they ran out of 97 Cove Street. Unfortunately, they could not compete and in 1996 closed their doors for good. The rest, as “they” say is history. Poor cliche, but fitting.

So the answer to who brought the world coffee syrup is both, the Italians and the Portuguese, Rhode Island and Massachusetts, right?

You know what? Fie on that! New Bedford brought the world coffee syrup. If you disagree, show us your proof! Raspberries!

When Joe isn't writing, he's coaching people to punch each other in the face. He enjoys ancient cultures, dead and living languages, cooking, benching 999#s, and saving the elderly, babies and puppies from burning buildings. While he enjoys long walks on the beach, he will not be your alarm clock, because he's no ding-a-ling.
Previous New Bedford Cultural Council awards $70,749 in grants
Next 8 Things to do this Weekend (Jan 02- Jan 04)