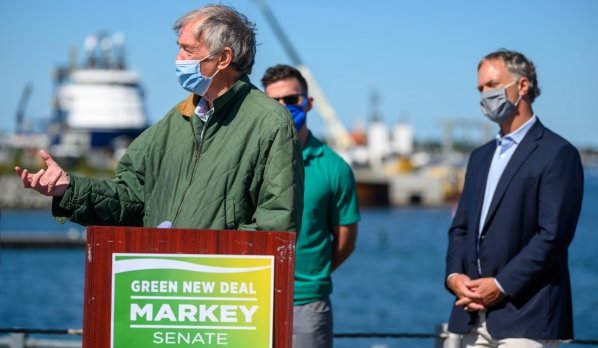 In the wake of President Donald Trump’s ban of offshore drilling only off the coast of three southern states, Senator Ed Markey joined New Bedford Mayor Jon Mitchell, State Representatives Chris Hendricks and Chris Markey, New Beford Fishing Advocate Jim Kendall, and Environmental League of Massachusetts’ Casey Bowers in New Bedford to call for a ban to offshore drilling up and down the Atlantic seaboard.

“The fact of the matter is that fishing and tourism in Massachusetts generate upwards of $20 billion in economic value each year,” said Senator Markey at the event. “These industries support more than 200,000 jobs in our state. In Massachusetts, we do not want to sacrifice these industries and these good, blue-collar jobs to pad the profits of white-collar Big Oil executives. Instead of drilling off our coasts, we should be using them to harness the power of offshore wind. The nation’s first offshore wind farm is housed right off the coast of Block Island and the potential off our New England coast is almost limitless. And there has never been mention in history of a tragic wind spill.”

Leaders at the event spoke to the critical need for a Green New Deal and bold climate action to combat the climate crisis, in addition to the negative impacts of offshore drilling on the fishing industry throughout New England.

Ed Markey has served in the United States Senate since winning the special election in 2013 and has amassed a deep record on environmental, racial justice, gun safety, and consumer protection issues. In February 2019, Ed Markey co-authored the Green New Deal with Congresswoman Alexandria Ocasio-Cortez. Raised in Malden, Ed Markey has always stood up for the priorities of Massachusetts.