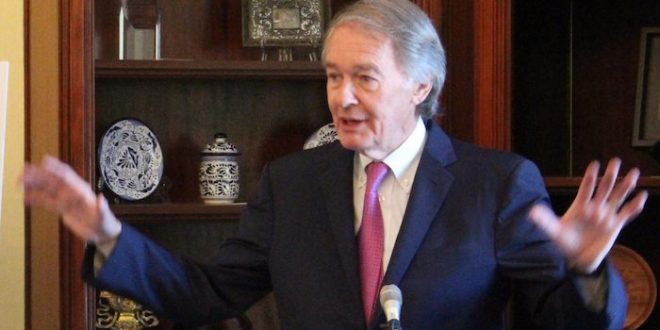 Senator Markey calls for halt to deportations, release of immigrants and closure of immigration courts

The following is a press release from Senator Markey’s office:

U.S. immigration detention centers have been called a “[public health] disaster waiting to happen,” due to their crowded conditions and Immigration and Custom Enforcement’s history of medical neglect and substandard care. Except in limited circumstances, the DHS has the authority to release noncitizens from detention while they await immigration court proceedings. Senator Markey is calling on the Acting Secretary to use this authority and release eligible individuals from its custody.

Senator Markey is further calling on the Acting Secretary to order a halt to all unnecessary deportations. Deportations pose a serious risk for the spread of COVID-19, particularly given that time in detention and grueling travel may weaken immune defenses and exacerbate the risk of infection.

“Accelerating the spread of this disease is not in our national interest,” writes Senator Markey in his letter to Acting DHS Secretary Chad Wolf. “It is our responsibility to halt measures and policies that jeopardize our global health and prolong this crisis. Accordingly, needless deportations must stop.”

The following is from the State House News Service

Senator Markey Calls for temporarily closure of all immigration courts

“The continued operation of in-person immigration hearings presents a significant public safety risk.” He called it “irresponsible” to continue immigration court proceedings during the coronavirus pandemic, “particularly without any health and safety precautionary measures in place.” The Boston-based Lawyers for Civil Rights is also advocating for an end to “immigration raids, detentions, and deportations during the public health crisis.”

Today, as the number of COVID-19 cases reach 185,067 worldwide, Senator Edward J. Markey (D-Mass.) called on the Department of Homeland Security (DHS) to immediately halt needless deportations and release from detention all immigrants who pose no public safety threat.